Burl Leon Mustard, 85 of Piketon passed away at 12:36 am on Monday, January 9, 2023 at the Pavilion at Piketon.  He was born on February 14, 1937 to the late Carrie Andrew Mustard and Cora McGowan Mustard.  On March 7, 1959, he was united in marriage to Janet Lambert Mustard who preceded him death.  Surviving are his daughters; Kathy Burton of Waverly and Valerie (Don) Mann of Piketon; grandchildren, Amanda (Zachary) Holbert, Austin Mann, Vanessa Mann and Janessa Mann; step-grandchildren, Donnie Burton and Bobbie Jo Harrison; great-grandchildren, Ethan, Carson, Amelia and Nora; step-great-grandchildren, Gage, Natalie, Denny Jack, and Merryl; former son-in-law, Joe Burton; and several nieces and nephews.  In addition to his parents and wife he was preceded in death by a daughter, Brenda Mustard; brothers, Ronald, Richard, Everett, Elmer, Lloyd, Delbert, Donnie, Russell and Earl; sisters, Freda Legg, Norma Ackley and Velma Grooms.

Burl proudly served our country as an Army Green Beret paratrooper.  He was a retired Nursing Assistant from Veteran’s Affairs.

Burl enjoyed writing poems, most were religious, and some were humorous.  He enjoyed his great grandkids immensely.

The family would like to thank hospice and the Pavilion for the care they gave to Burl.

Graveside services will be held at 11:00 am Thursday, January 12, 2023, at Arkoe Cemetery in Elm Grove with Pastor Todd Montgomery officiating. Military Graveside Honors will be conducted by Waverly American Legion Post 142.   The family requests in lieu of flowers that donations be made to The Cure Starts Now, 10280 Chester Road, Cincinnati, Ohio 45215 in Carson Holbert’s name. 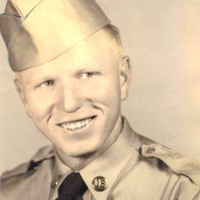