Sharon “Sherry” Canter, 79, of Ashley Corner, passed away Tuesday January 17, 2023 at SOMC Hospice Center. She was born July 6,1943 at Ashley Corner, a daughter of the late Leonard and Vivian (Skaggs) Jenkins.

She was retired from South Webster Schools after 33 years of service including her years at Minford and Vernon Elementary School.

Sherry was a lifelong member of St. Monica Catholic Church, having recently attended St. Peters in Chains Catholic Church. She was a die hard Jeep Fan who enjoyed attending all of the sporting events and watching her grandchildren play.

Sherry was also preceded in death by her husband, David Canter.

Funeral Services will be 2:00 PM Saturday January 21, 2023 at D.W. SWICK FUNERAL HOME in South Webster with private interment at a later date. Visitation will be 12 Noon to 2 PM Saturday at the funeral home.

In lieu of flowers the family request donations be made to SOMC Hospice Center, 2203 25th St, Portsmouth, OH 45662.
Online condolences may be sent to DWSwickFuneralHome.com. 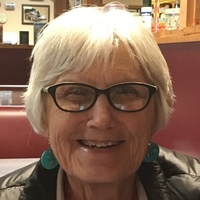