Jack Weldon Souders, 87 of Minford, Ohio went home to be with the Lord Friday, February 11, 2022 after a long battle with dementia. Jack was born September 4, 1934 in Oak Hill, Ohio, to the late Viola Snyder. He was an Army veteran and owned and operated Minford Parts Center for 20 years. One of his favorite pastimes was reading his Bible everyday. He loved to fish and enjoyed watching Nascar. Also took pride in manicuring his yard. Loved to go to church and attended Charity Free Will Baptist church in Clarktown and Minford Nazarene.

The family would like to thank the caregivers from Heartland Hospice Home Care Services for their special care, Chaplin George Vastine, Nurse Amy McClurg, Joe and Skeeter and Brandon Smith from Intrim.

Funeral services will be conducted 1:00 p.m. Tuesday, February 15, 2022 at Charity Free Will Baptist Church with Pastor Mark Bales and Pastor George Vastine officiating. Burial will be in Bennett Cemetery in Minford. Friend may call at Erwin-Dodson-Allen Funeral Home in Minford from 5:00 to 8:00 p.m. Monday and one hour prior to the service on Tuesday at the church. Military graveside rites will be conducted by James Irwin Post No. 622 American Legion and William A. Baker Post No. 363. Online condolences may be sent to www.edafh.com. 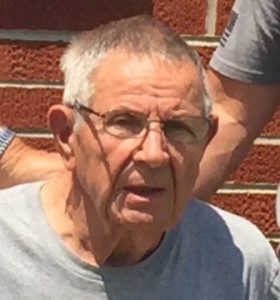