Scioto County Sheriff Marty V. Donini stated that his office received a 911 call on Saturday August 15, 2020 from a male on Greenbriar Road stating that a female had busted his window out of his house and that she was bleeding, he stated that the female left walking down the road with three small children. A second 911 call came in that a female with three naked children were standing in his yard and that they were all covered in blood. Deputies along with an ambulance was dispatched to this location, upon deputy arrival they observed a female covered in blood who was very combative that appeared to be under the influence of drugs she was being treated by the emergency medical staff. The deputies observed 3 small children with no clothes on covered in blood the children all appeared to be under the age of 4, they observed a small infant lying in a ditch that was unresponsive. A detective was contacted to respond to this location for a further investigation. Sheriff Marty V. Donini stated that the mother and two older children were taken to Southern Ohio Medical Center and the infant was flown to Cabell hospital in Huntington West Virginia. The mother was later sent to Grant Medical Center where she was treated and released, the two older children were transported from Southern Ohio Medial Center to Cabell Huntington for observation. The infant is currently still in the hospital and the older two have been treated and released into the custody of the Scioto County children Services. Deputies and detectives were able to obtain information during the investigation that the mother was observed having the infant in a choke hold before the infant went unresponsive. The detective learned that on Monday August 17, 2020 the mother was released from the hospital and that she could possibly be at a residence in Chillicothe Ohio. Detective Conkel forwarded this information to the Ross County Sheriff’s Office who responded and was able to detain the suspect without incident, the suspect was later transported to Scioto County and served a warrant for child endangering. Arrested was Mary Beth Carver age 39 of Lucasville, Carver has been charged with one count of child endangering a felony of the 3rd degree. Carver also had an outstanding warrant issued from Pike County for child endangering. Carver appeared in Portsmouth Municipal Court on Tuesday August 18 and is currently being held without bond. Sheriff Donini stated that this is still an ongoing investigation that could result in more charges being presented to the grand jury on a later date. Anyone with information should contact Detective Jodi Conkel @ 740-351-1091 Marty V. Donini, Sheriff 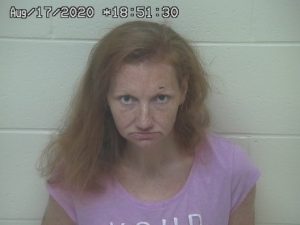