Scioto County Sheriff Marty V. Donini announces that his 911 communication center received a call on Sunday May 31, 2020 at 4:02 pm stating that a man had been run over by a car. The Ohio State Highway Patrol along with deputies responded to the roadway located in the 300 block of Furnace Creek Rd, Portsmouth, Ohio.

Chief Deputy Todd Miller stated upon law enforcement arrival it was determined that the male was run over intentionally.

During this investigation the detective was able to interview a witness and determine that the suspect was run over as a result of an ongoing love triangle involving a husband and a boyfriend.

Chief Deputy Todd Miller stated that the male suspect had left the scene of the accident and deputies made multiple attempts to locate the suspect. The male victim was identified as Mickey Ward age 42 of Portsmouth he was flown to Cabell Huntington Hospital and is listed in stable condition in the ICU unit.

On Monday June 1, 2020 deputies along with troopers responded to a possible location and were able to detain the suspect without incident.

Arrested was William M Akers age 59 of Blue Run Road Lucasville Ohio, Akers has been charged with 1 count of felonious assault a felony of the 2nd degree and 1 count of leaving the scene of an accident  a felony of the 4th degree. Akers is currently being held in the Scioto the Scioto County Jail on a $32,500.00 bond after appearing on Portsmouth Municipal Court on Wednesday June 3, 2020.

Sheriff Marty V. Donini stated that this is still an ongoing investigation that could result in more charges being presented to the Scioto county Grand Jury on a later date on this suspect. 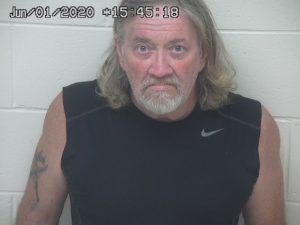