Scioto County Sheriff Marty V. Donini announces that his 911 communication center received a call on Friday May 29, 2020 from a cell phone repair business located in Wheelersburg Ohio stating that a male subject had come into the store wanting work done on his phone. The clerk observed images that she though was possible child pornography and wanted the Sheriff’s Office to check into this situation.

Chief Deputy Todd Miller stated that a deputy responded to this location and was able to obtain the cell phone in question. A detective was also contacted which resulted in the male subject being detained for questioning.

During this investigation the detective had reason to believe that several rapes and sexual assaults had occurred. After interviewing possible victims and watching videos and looking at images on the suspects phone it was determined that the suspect had been having sexual conduct with a female juvenile since 2017, she is now age 11.

Chief Deputy Todd Miller stated that as a result of this investigation it was determined that the suspect was filming the juvenile victim while he was having her perform sexual acts. One victim was taken to Adeana Medical Center in Chillicothe and was treated and released. Children services were contacted that resulted in the legal guardian signing a safety plan to keep the children safe.

Arrested was Michael Zornes age 36 of Portsmouth Ohio, Zornes was charged with 9 counts of rape of a child under the age of 13 a felony of the 1st degree and 18 counts of pandering sexual matter involving a minor a felony of the 2nd degree. Zornes was placed in the Scioto County Jail with no bond and will appear in Portsmouth Municipal Court on Monday June 1, 2020.

Sheriff Marty V. Donini stated that this is still an ongoing investigation that will result in more charges being presented to the Scioto County Grand Jury on a later date on this suspect. 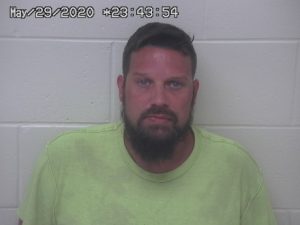