On January 15, 2020 at approximately 10:16a.m., officers with the Southern Ohio Drug Task Force, which consists of narcotics detectives from the Scioto Co. Sheriff’s Office and the Portsmouth Police Department as well as agents with the FBI, assisted by Portsmouth P.D. SWAT, a Portsmouth P.D. Canine, and an additional Sheriff’s Office detective conducted a narcotics – related search warrant execution at the residence of 40 year old Travis L. Grier a.k.a “Veno” located at 2522 Scioto Trail Portsmouth, Ohio.  During a search of the residence and property, officers seized approximately (63) grams of suspected heroin, (55) grams of suspected cocaine, a loaded 9mm handgun, digital scales, a GMC Yukon Denali, approximately $7,000 cash, and additional evidence of drug trafficking.  Some of the suspected heroin and cocaine seized was pre-packaged for sale.  Estimated street value of the suspected drugs seized is $12,000.

Grier was arrested and charged with Trafficking in both suspected Heroin and Cocaine, both felonies of the 1st degree, and Having a Weapon While Under Disability, a felony of the 3rd degree.

Grier was placed in the Scioto County Jail and held on $350,000 bail.  Grier was to be arraigned on Thursday, January 16, 2020 in Portsmouth Municipal Court at 9a.m.

The case is continuing to be investigated by the drug task force and will eventually be forwarded to the Scioto County Prosecutor’s Office to be presented to a Scioto County Grand Jury for the consideration of additional felony charges. 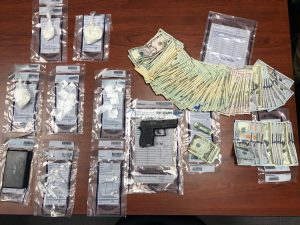