It was a mix of detail oriented, emotional and tense testimony during the third day of the Groves murder trial taking place in the Scioto County Common Pleas courtroom of Judge Mark Kuhn.

The testimony presented also raised the spectre of a controversy from last year when The Scioto Voice broke a story regarding Scioto County Children’s Services.

After Judge Kuhn entered the courtroom a little after 9:00 A.M., Dr. Darren Adams, the Scioto County Coroner and an Ob. Gyn. at SOMC, told the court about the details surrounding the birth of Dylan Groves. He said the labor of Jessica Groves was so quick, there wasn’t time to do a number of things that are usually performed. However, Dr. Adams did note that when he asked Groves several questions regarding her health and prenatal care, Groves was “aloof” and did not attempt to answer his queries. Under questioning from Scioto County Assistant Prosecutor JUlie Cook Hutchinson, Adams stated that “Jessica Groves was distant and not acting like someone you would normally see in that condition.”

Next to take the witness stand was Patricia Craft, the case worker assigned to Dylan Groves by Scioto County Children’s Services (SCCS). CRaft was recalled from the previous day when her testimony was halted due to a lengthy recess. This time, the case worker’s recall was tested for nearly three hours.

CRaft reported in detail-dense testimony about the many scheduled home visits and the high-percentage of those that were missed by Daniel and Jessica Groves. She also stated that she had looked through the couple’s single-wide modular home to make sure living conditions were favorable to both Dylan and his then, 14-year old brother. Craft stated that all of the necessary supplies, including food were present in the home when she visited. After the initial period of supervision, Craft stated that the Groves began missing court ordered appointments and later found out that Daniel Groves had lied about the status of his whereabouts used as excuses being absent for the mandatory court appointments and doctor’s visits.

Craft, whose answers were short and detail-oriented, became visibly upset when relating that the March 28th appointment that the family kept, was the last time she was to see Dylan alive.

Under cross-examination by Jessica Grove’s defense attorney Shawn Stratton, several contentious back and forths were held where Stratton questioned her level of recall. Under questioning by Stratton, Craft revealed she had not went through every room in the house and had only visibly adjudicated Dylan’s condition bh looking at him closely without actually holding or touching him.

Craft also made mention of an item that was a point of major controversy shortly after Dyalan’s body was discovered-that a request for an Amber Alert to be filed was denied by an SCCS supervisor because it “would make the department look bad if we lost a child.” That statement has been batted around and denied by the agency as well as law enforcement as being inaccurate. Craft was resolute in her statement regarding the matter.

Craft’s testimony ended at 12:26 P.M. with a lunch recess. Upon returning to court, the prosecution presented a pair of pediatrician’s Moammad Ali and Greory Hudsoon, both of whom had treated Dylan at different stages of the child’s short life. Both men gave detailed information regarding his condition as being somewhat normal with the exception of withdrawal symptoms being suffered as a result of Jessica’s drug use during pregnancy. Both pediatrician’s also reported no fractures or bruising of any kind during their separate examinations.

By far, the most emotional and riveting testimony of the day came from Andrea Bowling, the local school teacher that took the phone call from SCCS and accepted the opportunity to foster Dylan. After laying out her history as a caring and extremely qualified foster parent, Bowling spoke of the amenities she had ready for Dylan’s arrival to her family’s home, telling the court, “ I have a really good support system of family and friends, with clothes and other items coming in immediately.” Bowling’s family, including her parents, sat in the gallery, some with their heads bowed during her time on the witness stand.

When asked by Scioto County Prosecutor Shane Tieman if she was aware of any special needs or special conditions that Dylan may have, Bowling replied in the affirmative. “They told me he was born addicted and he was withdrawing, At that time he was 5lbs. 4oz and was still so tiny,” When asked about the symptoms of withdrawal that Dylan was suffering from, Bowling sobbed openly. “He had tremors and his arms would shake and his legs would jerk and he had sweats and just wanted to be held whether he was asleep or not.” At that point, Judge Kuhn ordered a brief recess so that Bowling and other members of the court could regain their composure from hearing the heart-rending testimony.

Upon her return, Bowling recounted a “team-meeting” at SCCS where she met Jessica and Daniel Groves when the couple appeared for a one-hour visitation with Dylan, on January 24th, less than two weeks after the baby’s birth. She described Jessica Groves demeanor as there being the possibility “she was on something,” and Daniel Groves as “quiet”. Bowling went on to state that when she called several days later to see when the next visitation would take place, she was informed that a reunification with Daniel Groves was going to take place on Monday, two days later.

That reunification took place eleven days after Bowling accepted Dylan into her home.

Eleven days and a passed drug screen by Daniel Groves.

When questioned by Srtatton, Bowling said that she had called SCCS and voiced her concerns about continued drug use by the Groves. “Are you surprised there is no record of you call to SCCS,” Stratton asked. “No, I’m not surprised,” Bowling said.

Following Bowling’s testimony, Scioto County Sheriff’s Office investigator Adam Giles gave a dramatic account of the day that the Groves were taken into custody-a day that ended with a nearly six-hour standoff with Daniel Groves refusing to come out of the home, despite the house being surrounded by law enforcement officials and members of the SRT team from the Ohio Highway Patrol. Giles spoke of the SRT’s robot that cleared the home and eventually located Daniel Groves.

Scioto County Sheriff Captain John Murphy followed that with a retelling of how the Groves had avoided the Sheriff’s department and told of an incident wherein the Groves escaped Murphy and investigator Todd Miller on a four-wheeler.

Thursday will represent the fourth day of the trial, with the expectation of a long, tough day of physical evidence being presented by the prosecution. 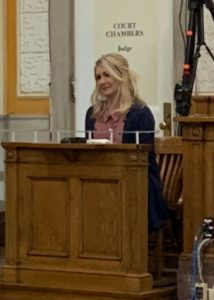