The details of the case are familiar to almost everyone in this region, but what happened on the second day of the Groves murder trial certainly took most by surprise.

Assistant Scioto County Prosecutor Julie Cook Hutchinson took to the podium in front of hushed courtroom and delivered a powerful and emotional opening statement to the jury, laying out all of the logical reasons they would find Jessica and Daniel Groves guilty of aggravated murder as well as ten other felony charges.

However, it was defense attorney Shawn Stratton, representing Jessica Groves, who made the best case as to his client’s conviction on the most serious of accusations. After describing the effect of the decades old opioid crisis in Scioto County, Stratton told those present, “The first step in winning this fight against the ravages of addiction, the first step, is for individuals who have been led down this path to take personal responsibility for their crimes and their sins-and that starts here, right now. My client, Jessica Groves, was and still is a drug addict. There is no doubt about that fact. She and she alone, caused the injuries to Dylan Groves, which led to his death. She alone, murdered Dylan Groves. She will testify she murdered Dylan Groves and she will testify to the injuries she caused to Dylan Groves.”

The proclamation caused a hush to make its’ way around the courtroom, quickly settling before Stratton continued.

Earlier, Hutchinson painted a vivid portrait of Dylan’s short life, from his birth on January 10th as a drug-addicted newborn and the physical trauma he suffered because of the illegal narcotics found in his system, as well as the rest of his short life which, according to estimates, ended on March 28th.

At times, her voice cracking with anger, Hutchinson told the jury of seven women and five men, “you are going to see, hear and learn things that you cannot unsee, unhear and unlearn, and for that, I am sorry.” All the while, a photograph of the infant was displayed on a large screen to the left of the defense table.

After laying out the11 total charges the couple faces, as well as describing in detail, what witnesses for the prosecution were going to attest to, she closed by saying, “I submit to you, you will have proof, beyond a reasonable doubt that each of these defendants are guilty of the crimes for which they are charged. At that time, I will ask you to return a verdict of guilty as to each defendant on each count.”

The drama was heavy even before the jury was escorted into the courtroom, as Christine Scott, the defense attorney representing Daniel Groves, asked Judge Mark Kuhn for a change of venue, citing the possibility of a biased jury that due to intense media coverage might have a predisposed opinion of the case. Kuhn acknowledged the request, but told both Scott and Stratton that they had helped seat the jury, they had interviewed the jury and rejected the request.

While Jessica Groves has not formally admitted to the court that she did indeed murder Dylan, her attorney left no doubt as to her intentions. Through Stratton, Jessica Groves also stated that her husband, Daniel Groves,

“Why put everyone through this trial? Because, she is going to do the right thing, “Stratton said. “That right thing is to take personal responsibility for her crime and her sins. It is also to protect and defend an innocent man. Daniel Groves had nothing to do with the death of Dylan Groves and did nothing to cause the death of Dylan Groves. He was foolishly unaware of his injuries. Dylan Groves died on Match 28th and then, confusion set in. In that confusion, Daniel made poor decisions that led us here today. Did he hide the body/-yes?  Did he suggest the well? Yes, he knew where the well was. Did he help craft the coffin to preserve Dylan? Yes, he did. But that is all he did. My client, Jessica Groves, is responsible for Dylan’s death.’

The witnesses called after the opening statements from Stratton and Scott consisted of three R.N.’s that had intimate, firsthand knowledge of the birth of Dylan Groves because they were present and assisted in various stages of the infant’s birth and evaluation.

All attested that the baby and the mother were both suffering from addiction, with one witness, telling the jury that Jessica Groves had stated, “I was taking heroin while pregnant, just enough to keep from having withdrawals from happening.”

After a recess for lunch, several social workers testified to the nature of Dylan’s placement with a local foster family after some confusion and conflict of opinion with Scioto County Children’s Services. The details of that conflict were later rectified, according to one witness and the infant was removed from the custody of his father, Daniel Groves.

During the last witness called for the day, there was some confusion between the prosecution and the defense as to what documents were being entered into evidence and after nearly an hour break to work pout the problem, the trial was recessed for the day. The trial will resume tomorrow at 9:00 A.M. with a local physician set to testify first, followed by the Social Worker whose testimony was interrupted by the documentation matter. 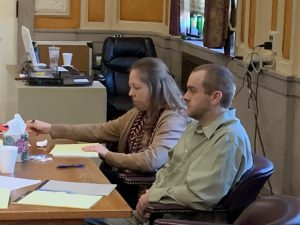