Although the trial date had been set for some time, the courtroom of Common Pleas Judge Mark Kuhn was rife with tension, as Daniel and Jessica Groves appeared in court for a final pre-trial hearing regarding charges of aggravated murder in the death of their infant son, Dylan Groves. Dylan’s body was found by law enforcement in June of this year, at the bottom of a well located in northwest Scioto County.

The jury trial, expected to last up to a week, will begin on Monday, January 6th, 2020.

The pre-trial hearing covered all of the facets required to ensure a fair and speedy hearing, with both defendants hearing the prosecution’s evidence at the same time. Those actually present heard Judge Kuhn ask Scioto County Prosecutor Shane Tieman and defense attorney’s Shawn Stratton and Christine Scott if there had been any discussion regarding a pleas deal for either defendant. It was indicated that there had been some preliminary talk, but those dialogues had failed to produce a result favorable for either side. With that concluded, Kuhn moved the agenda forward, reaffirming the initial date to remain in place.

Tieman spoke exclusively with The Scioto Voice immediately after the hearing, stating, “Typically there is one final pre-trial that covers procedural matters that the court requires we review, such as security measures. There were no surprises today and I expect the defense to be ready when they present their case and we will certainly be ready to present the state’s case. At that point, it will be up to the jury to decide the truth of this matter.”

When asked if he saw a heightened need for security in these two cases, Tieman declined to comment.

The matter of security did come up in the hearing, however, regarding whether the two defendants would be required to wear shackles when entering the courtroom and if or when they might possibly be called to the witness stand, Tieman stated that the state would have no objection to ordinary safety measures involving restraints being used and that it would be permissible to the prosecution if both Groves’ were allowed to wear “civilian clothing” during the trial. Scott, the defense attorney representing Daniel Groves, also asked for permission to provide paper and a writing utensil for her client. Kuhn said he would review proper safety mechanisms with his court officers and issue his decision before the proceedings in January begin.

Regarding the matter of discovery by both sides, Kuhn inquired of the status of possession and shared information. “Your Honor, there might be a few more, minor, supplementals, but the majority of substantive discovery has already been provided to defense counsel,’ Tieman offered. “With regard to our reciprocal request for discovery, we have not received a witness list or documentary evidence.”

Tieman told the court that he expected “25 to 30” witnesses to be presented by the prosecution, including doctors from the local hospital as potential medical experst, as well as toxicologists and a representative of the coroner’s office that performed the autopsy o Dylan.

Judge Kuhn then asked the defense if they intended to produce any discovery, whereupon Scott said that they did not have any to present at this time, but, they were currently receiving information and if they were to include that information in the presentation of the client’s defense, it would certainly be presented in discovery.

Scott also indicated there was a possibility of evidence that was under current review and would be reported in a timely manner.

Stratton indicated that, at this point, there were not any additional items for discovery and that at this point, his client would not be called as a witness.

Both Daniel and Jessica Groves have entered “not guilty” pleas to all charges, with both facing eleven..

All stipulations, as well as media parameters during the trial were also introduced and decided.

Kuhn told those present that jury selection will begin on the 6th, with jurors drawn from three panels. The potential jurors of the first two panels will be summoned to be present at 8:30, with the third panel summoned for 1:00 P.M. the same day. Kuhn then reviewed his selection process to the prosecution and defense counsel along with the challenge process.

The horrific injuries suffered by the two-month child have been widely reported and were first confirmed locally by The Scioto Voice upon the release of the final autopsy report.

Stratton also declined comment before the trial when approached by The Voice. 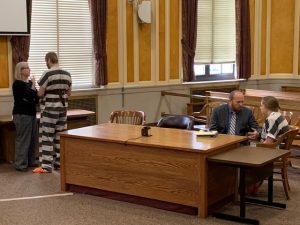