Marting’s building could be her lasting legacy

Jo Ann Aeh is a familiar face within Portsmouth politics. Aeh served as the 2ndWard Councilwoman from 1983-1985, was appointed to City Clerk from 1988-2011, and then once again served on council after her retirement from 2015 to July of this year.

Aeh resigned her seat just a few months ago following a dispute with the Ohio Public Employees Retirement System (OPERS). A month before regaining her seat in 2015, Aeh learned that she would have to give up some benefits offered through her retirement and take the plan offered to members of city council. This meant that she would have to pay 100% of her insurance premium. Aeh called OPERs for clarification, and explained how she was not an employee but an elected official. According to Aeh, the issue was then resolved.

But in June of 2019, she was notified that she would have to take the insurance offered by the City or go without hospitalization benefits. So, she elected to resign instead of paying the additional $800 per month.

“It seems unfair to me and somewhat unconstitutional,” wrote Aeh to Kent Thomas, Chairman of OPERS. “I am being denied the opportunity to serve my community unless I give the city a little over $800 a month for a position that nets me $299.28 per month.” Aeh, not being aware that OPERS would reverse their previous decision, had already filed for re-election. She was already on the ballot for November before she heard the news. “My chances of winning are good,” wrote Aeh. “If nothing changes, I will again have to resign. I would appreciate it if you can enlighten me in any way that would help me understand why, in these types of cases, a waiver is not given any consideration.”

Aeh has yet to hear anything back from OPERS about her appeal. Nevertheless, she remains in the race of the 2ndWard seat and hopes to win- even if she is forced to resign once more in January.

“I haven’t heard anything back,” said Aeh. “And if I win and have to resign again, council will be in the position to appoint someone to the seat. If they like Charlotte (Gordon), they can appoint her for four more years. If not, they can look elsewhere.”

Charlotte Gordon was appointed by council to fill the vacant seat in the 2ndWard. She will fill the seat until the end of the December. But Gordon has since decided to run as a write-in candidate for seat against Aeh- making for a very interesting (if not slightly confusing) race.

At 82, Aeh was not planning on running again. But she says she was convinced to get on the ballot once again by fellow councilmen and community members. “I wasn’t going to run,” laughed Aeh. “But I would hate to go out because of this insurance problem. It’s unfair.” Aeh wants to go out on her own terms.

In the meantime, Aeh still stays involved in Portsmouth politics. The most important issue to the former councilwoman remains the Marting’s Building. She wishes to cement her legacy by converting the long vacant building into the new Portsmouth City Building.

“Portsmouth has been seeing all sorts of positive changes,” said Aeh. “That’s what I’ve been hoping for years. And it’s why I want to see the City go into the Marting’s building. There is a lot of traffic surrounding the city building and it would bring even more people to the downtown. Those empty buildings and storefronts would be filled up by new businesses moving in. It would be a big benefit to the City.”

“It would take a partnership,” she admitted. “But before I resigned, I was working with potential partners. It is still possible for this to happen.”

Aeh then detailed her plans for the former department store.

“The City would occupy the 2ndand 3rdfloors. The 1stfloor and basement could be utilized for something else- maybe even something like a food court. The annex could be the Police Department.”

According to Aeh, the move would would mean no additional taxes for Portsmouth residents.

“Trent Williams is involved in this. This would come at no additional cost. And I’ll tell you this- we can do it. And we can do it without increasing taxes. We would partner with a developer. Right now, they are trying to keep me in the loop with all of it but I’m just a regular citizen at the moment.”

Aeh also touched on some other issues facing the city, such as signage, encroachment by Portsmouth City Schools, and the performance of City Manager Sam Sutherland.

“There are yard sale signs all over the City. We have commercial property signs. We have for sale signs, and signs about firework and mattress sales, too. They are everywhere,” said Aeh. “In 1984, there was an ordinance passed that prohibited signs on posts. Now, they are popping up everywhere. The Police Department should enforce that ordinance…in order for you to have a yard sale you go to the Police Department for a permit. And in their instructions, they say you cannot post signs on poles. So, they should be enforcing this.”

According to Aeh, Portsmouth City Schools have encroached on city property. And while there’s not much to be done about it now, she hopes to stop it from happening in the future.

“I couldn’t get former City Manager Derek Allen to do a thing about it. I’m not sure there’s anything to be done now. It’s probably not in the City’s best interest. But you can go down Findlay Street and look at the sidewalk. You can go across Waller Street…there are bleachers where the sidewalk used to be. I turned all of this into David Malone when he was Mayor. Nothing was done. And when I got on council, it was one of my issues. I never understood why Derek laid into Tim Wolfe (owner of Patties and Pints) the way he did when he wouldn’t address the problem with the schools.”

Allen was eventually fired by City Council last year. And Sam Sutherland was hired to replace him. Aeh is complementary of Sutherland’s performance thus far.

“Sam is doing a good job. Sometimes I think he’s too nice, though,” she laughed. “But council are merely legislators. We can put some things forward, but ultimately we vote on whatever Sam brings us. In my opinion, we just need to focus on the ordinances we already have in place.”

In the end, Aeh hopes voters will recognize her experience and cast their ballots for her next month.

“I’m a lifelong resident of Scioto County. I graduated from East High School. My time here has certainly revolved around legislation- as city clerk and as a council person. Charlotte is going to be a write-in candidate and she certainly has that right. If she doesn’t win, than I’ve got until the end of December to my insurance problem sorted out. She may end up serving, anyway. And if she beats me, it’s done. But I hate to give up being on the ballot. This would be a bad way to go out and I think, ultimately, it’s unfair.” 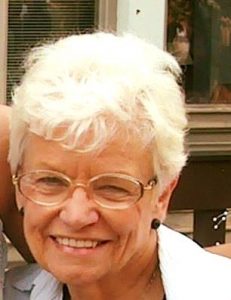