A mother left behind

Bowling works to save children through a tragedy

“I was at school, teaching, and I received a phone call from Scioto County Children’s Services (SCCCS) which as a foster parent isn’t unusual, on the morning of January 15th. I was asked to pick up a baby from the hospital that had been born drug-addicted. I replied yes, absolutely. I went to the hospital that evening, where I received four hours of training learning how to take care of this baby while tests were still being run on him, due to his smallness,’ Bowling recalled.

That infant was Dylan Groves.

After taking a leave from her school district in order to care for the newborn baby boy, Bowling worked her hardest to help relieve his struggles from withdrawal symptoms, holding him close as possible and swaddling him in blankets to keep him from shaking. She had been given the charge of caring for two foster children, previously, but she knew in her heart, this was different and special.

Dylan was in Bowling’s loving and protective care for twelve days.

“SCCS called me after ten days, actually and told me that, out of the blue, Dylan was going to be reunified with his father. I immediately asked them to reconsider-I basically begged them to change their minds. I did not believe Dylan was ready to go to a home where there had been previous drug use. I was told they (SCCS) had made their decision even though I requested another meeting to discuss this based on how fragile Dylan was and the severity of his withdrawals. They ignored my requests and had me to bring him to the SCCS office on a Monday morning-we waited while his father was 25 minutes late for the pickup. “

At the time of the reunification, Daniel Groves was ordered by SCCS not to allow the mother, Jessica Groves to be around Dylan, according to Bowling. “It soon became obvious that she was around him.”

“That day was so hard,” a tearful Bowling said. “I remember talking with Dylan’s dad, telling him some things like how to care for him and before they left, I asked to kiss Dylan’s head one more time and he said yes.” In her heart, Bowling hoped that wouldn’t be the last time she would give the little boy that kiss and she spoke of some measures she had taken to make sure Dylan would always know just how special he was to Bowling and her family.

“I gave his Dad a Bible to give to Dylan, for when he was old enough to read it and I also gave him tons of formula, diapers and a gray blanket that he always cuddled up in with me. I also gave Daniel a letter-it described how much I loved Dylan and how precious he was to me and I would like to be a part of his life, by knowing of the milestones he would reach during his life. I even gave them my phone number, but I never received a call. Once a child is returned to the birth parents children’s services agencies will not give out information to the foster parent. It was a very, very, emotional reunification.”

A sense of foreboding suffocated Bowling as the man and his infant son left the office. “I expressed that to SCCS before the reunification which fell to deaf ears. I knew this wasn’t supposed to happen: to the point that I had a prayer group praying for Dylan, every day, before the reunification. We prayed for Dylan for months and months, until they found him in that well.”

That same sense of worry drove Bowling to ask SCCS on a number of occasions if Dylan was okay over the following months-“I was always told he was doing well., and not to hinder the reunification process by asking about him.” she informed The Scioto Voice.

Just as vividly as she recalls meeting Dylan for the first time, she remembers the minute she learned of Dylan’s fate.

“I screamed for a solid half an hour and I cried-I still cry, every single day.” With tears running down her face, Bowling spoke of the gratitude she felt for her family and friends that came to her side immediately. “I was angry, sad and so mad-I felt helpless. I was devastated. The grief has been so profound for Bowling that she lights a candle every day beside a photograph of the beloved baby, in his memory.

However, out of that crushing grief, a seed was planted.

“After I was able to process and accept that he was gone, my brother and my sister-in-law and a good friend decided we were going to do something to make a change. We got together a few weekends in a row and developed a plan to pass “Dylan’s Law.” The idea that was devised focused on making serious and lasting changes to the reunification process in Ohio.

“Our State Representative Brian Baldridge is working on this, along with our new State Senator, Terry Johnson. We will not stop until productive changes have been made. The House has given us some very positive feedback and has recognized the need for changes to be made. The only thing that can give me any peace about this is in knowing that Dylan’s life will be used to help save other children,” Bowling said, struggling to keep her emotions in check.

“When Daniel and Jessica’s murder trial was pushed back, I was afraid this would be forgotten to an extent. I don’t want this to be forgotten, change needs to be made, now. Dylan’s short life deserves a purpose and to have meaning.”

Bowling, who has been an educator for 18 years, is currently caring for another baby, a little girl and the mother to a number of children in our area told The Voice she will be returning to work soon. The events of this year have impacted her as a teacher, too. Every day is a gift-people do not know what some of the kids in our county go home to. We try to protect them but it’s a circumstance where we do the best we can do and leave it tin God’s hands.”

But it’s not enough and she’s not sure things will ever truly be the same for her and her circle.

“My heart literally aches, every day for Dylan. My Lord gives me strength and peace in the knowledge that I will get to see him again. I believe he is in the arms of angels, now. That gives me some peace,” Bowing said serenely.

Even with the heartbreak that she carries and that, indeed, all familiar with this story carry, Bowling believes that being a foster parent is a calling f a high nature and still, a worthwhile endeavor.

“I want to say to anyone with the best of intentions, if you feel the lead to become a foster parent, please do. We need good foster parents who will answer the call to love these babies. They need us to love them and be their voice.”

To be Dylan’s voice.

To make sure that twelve days is never, ever long enough, again. 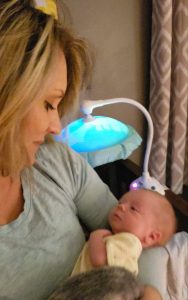