Scioto County Sheriff Marty V. Donini announces that his 911 center received a call on Tuesday October 1, 2019 from a Franklin Furnace woman stating that somebody had broken into her house and stolen several items to include a 500 watt generator, musical equipment and a Russian rifle valued at over $10,000.

Captain John W. Murphy stated that deputies responded to this location that resulted in a report being filed and forwarded to a detective for an investigation. Captain Murphy stated that during this investigation detectives were able to locate one of the stolen guitars at a music shop in Ashland Kentucky. Detectives were able to use the video and documentation from the music store to identify the two suspects involved in this burglary along with the description of the vehicle used during the burglary.

Captain John W. Murphy stated that his detective working jointly with the Ashland PD was able to get the guitar released to the victim.  Murphy stated that detectives received information that one of the suspects was attempting to pick up some of the stolen property from an out of state pawn shop on Tuesday October 1st. With cooperation from the business owner and law enforcement,  an arrest was made in Franklin Furnace after the stolen items were picked up.

Captain Murphy states that Lindon Johnson of Franklin Furnace, OH was arrested and transported to the Scioto County Jail on a charge of burglary a felony of the 2nddegree and is currently being held on a $30,000 bond.

Captain Murphy stated that this is still an ongoing investigation that could result in more charges being presented to the grand jury on a later date. Anyone with information should contact Detective Jodi Conkel @ 740-351-1091. 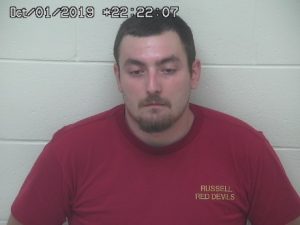