A grand jury has indicted the sheriff of Pike County, Ohio for theft, tampering with evidence, and other charges.

The 16-count indictment was filed Friday in the Pike County Court of Common Pleas.

Sheriff Charles Reader is facing several different charges – both felonies and misdemeanors – including seven counts of conflict of interest.

“This has been a long and intensive investigation with unfortunate and very serious results. It is our job to hold public officials accountable and root out fraud, waste, and abuse in our communities. We do not take these charges lightly and recognize that no one is above the law. While this is a major step toward seeking justice, our team is fully prepared to present these findings to a jury as this matter moves forward. I’d like to commend everyone who worked on this case for the immense amount of effort and detail that has been dedicated to the investigation.”

Faber said the Auditor’s Special Investigations Unit took a lead role in the case that began in 2018.

This comes in the midst of a massive investigation his office is working on — the killings of eight family members in Piketon, Ohio. While we do not know if these charges are related to the Ohio massacre investigation in any way, it leaves questions about how the sheriff’s indictment could impact the cases.

Ohio Attorney General Dave Yost released the following statement, saying he does not believe the indictment will have any impact on the Rhoden murder cases:

“This will have no impact on the Wagner capital murder cases, as Sheriff Reader was not the primary witness for any issue of fact or law. Ohio sheriffs act with integrity and honor, and this rare occurrence does not reflect the excellent work they do daily throughout their counties.”

Reader will be arraigned Tuesday, July 2., Common Pleas Judge Randy Deering has recused himself because he has frequent contact with the sheriff’s office. 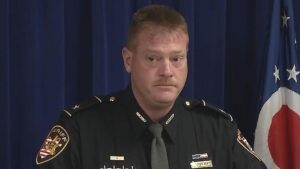