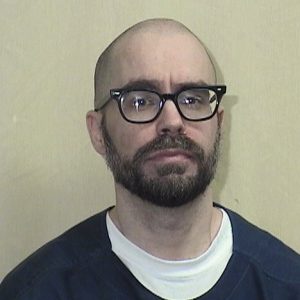 Scioto County Prosecutor, Shane Tieman announced today that on March 29, 2019 Greg Reinke, formerly of Cuyahoga County, Ohio, was sentenced to eighty-six years in prison for his role in two separate incidents that occurred at Southern Ohio Correctional Facility while being held as an inmate there.

The first incident occurred on June 4, 2017 wherein four inmates were handcuffed to a table for some recreational time. Inmate Reinke was handcuffed to a neighboring table and managed to slip his cuffs. He then removed a shank and began stabbing the four other inmates repeatedly. One inmate, Dontez Hollis, was able to break out of his cuffs and heroically came to the defense of the other inmates, preventing further harm. Thankfully all four victims survived the encounter.

A second incident took place February 20, 2018 involving Reinke and another inmate, Casey Pigge attacking a corrections officer with shanks. Thankfully, the officer survived the attack. Because the case is still pending regarding Mr. Pigge, details as to the attack have not been released to the public.

Both of these incidents resulted in multi-count indictments against Mr. Reinke and a multi-count indictment against Mr. Pigge. For the June 2017 incident, Mr. Reinke was indicted on four counts of Attempted Murder and four counts of Felonious Assault. Added to the charges were specifications for being a Repeat Violent Offender as Reinke had already been convicted of Aggravated Murder and other serious crimes out of Cuyahoga County.

For the February 2018 incident, Reinke and Pigge were indicted for Attempted Aggravated Murder, Attempted Murder, Felonious Assault, Kidnapping and two counts of Weapons While Under Detention.

A Pretrial Conference was scheduled for March 29, 2019 and the Court was informed that Mr. Reinke wished to withdraw his former plea of not guilty and entered a plea of guilty to the charges in the indictments.

As a result of his pleas, Judge Howard Harcha III sentenced the Defendant to fifty-four years for the June 2017 incident involving four victims and thirty-two years for the February 2018 incident involving the corrections officer. The sentences were run consecutive to each other for a total of eighty-six years. The case against Mr. Pigge is set for an appearance at a later time.

Prosecutor Tieman related that it was important that justice be provided for these victims. What they went through was horrifying and changed their lives. It is his hope that these cases will shed light on issues that need to be addressed in our penal system to better protect the personnel and inmates in our institutions.