On Tuesday, March 19, 2019 at approximately 11:17p.m., officers with the Portsmouth Police Department responded to the complaint of subjects fighting at room 46 of the Royal Inn located on Kendall Avenue in Portsmouth, Ohio.  While investigating the complaint, officers came into contact with 23 year old Richard Lee Bolda of Front St. Portsmouth, Ohio and observed a semi-automatic handgun present in the room.  Bolda was found have a warrant for his arrest on indictment related to several felony drug offenses that had been issued by the Scioto County Common Pleas Court after a case had been presented to a grand jury by the Southern Ohio Drug Task Force and the Scioto County Prosecutor’s Office earlier this year.

Over $2,500 cash was found on Bolda’s person and further investigation resulted in the discovery of approximately 62 grams of suspected crystal methamphetamine a.k.a. Ice and 19 grams of a powder suspected of being heroin and / or fentanyl.  The suspected drugs seized have an estimated street value of $6000.

Upon request, officers with the Southern Ohio Drug Task Force responded to the scene to assist with the investigation and upon a further search of the room  discovered additional evidence of drug trafficking.

Bolda was charged with Trafficking & Possession of suspected Methamphetamine, both felonies of the 2nd degree, and Having a Weapon While Under Disability, a felony of the 3rd degree.

Bolda was placed in the Scioto County Jail and was to be arraigned in Portsmouth Municipal Court on Wednesday, March 20, 2019 at 9a.m. Bolda is also being held without bail until he is arraigned in Scioto County Common Pleas Court.

The case against Bolda will eventually be forwarded to the Scioto County Prosecutor’s Office to be presented to a Scioto County Grand Jury for the consideration of additional felony drug charges.

Chief Ware and Sheriff Donini request anyone wishing to leave drug information for the Southern Ohio Drug Task Force, should phone the Task Force tip line at
(740) 354-5656 or email drugs@sciotocountysheriff.com.  All information will be kept confidential and anonymous. 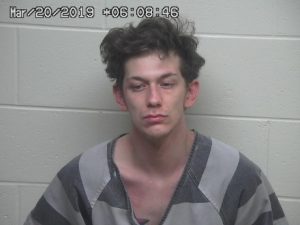