Scioto County Sheriff Marty V. Donini announces that his 911 center received a call on Tuesday March 12, 2019 at 11:44 pm from Speedee Mart Sunoco station located at 220 Center Street, Wheelersburg Ohio. The caller reported that a female had stolen items from inside the store and fled in her vehicle striking a man in the parking lot.

Captain John W. Murphy stated that deputies responded to this location and was advised that the female entered the store stealing 3 tall boy size beers by placing them inside her purse without paying. The clerk chased the female out of the building when another employee pulled onto the lot and observed the clerk chasing the female, he attempted to calm the customer down while the clerk was getting her vehicle registration number the suspect backed up almost hitting the clerk behind the vehicle when she then put the vehicle into drive giving it gas striking the male employee causing him to flip over the hood of her vehicle. The male was treated by Porter Township EMS at the scene for non-life threatening injuries.

Captain John W. murphy stated that the female fled the scene in her vehicle before deputies arrived, during this investigation deputies were able to view the cameras in the store showing the incident and suspect and were able to get a possible address on the suspect. Deputies responded to a location in Portsmouth and obtained information on the suspect and a possible location in Wheelersburg.

Captain John W. Murphy stated that the deputies checked an address being 1140 Kinker Drive Apt E. Wheelersburg, Oh and were advised that she does stay at this location but was not home at this time. A deputy was leaving  this location when he observed the suspect vehicle and was able to make a traffic stop on the vehicle on Center Street in Wheelersburg resulting in the female being detained without incident. During this traffic stop the female had slurred speech and admitted that she had been drinking that resulted in the Ohio State highway Patrol responding to this location and giving the suspect a breath analysis test that resulted in her being charged with driving under the influence.

Arrested was Erin L. Spears age 46, Spears has been charged with aggravated robbery a felony of the first degree and appeared in Portsmouth Municipal Court on Wednesday March 13, 2019 and is currently being held on a $100,000 bond.

Sheriff Donini stated that this is still an ongoing investigation that could result in more charges being presented to the grand jury on a later date. Anyone with information should contact Deputy Chase Workman @ 740-354-7566. 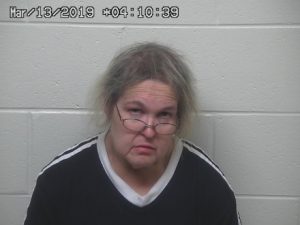