The Scioto County Sheriff says a South Webster man has been arrested and charged with sexual conduct with a dog.

Sheriff Marty Donini says Jayven D. McGlone 24, of South Webster, Ohio, has been charged with one count of sexual conduct with an animal a misdemeanor of the 2nd degree and probation violation through Common Pleas Court.

Sheriff Donini says his office received a report on Sunday, February 24th, 20,19 stating that a video has been circulating around the community showing a man having sexual conduct with a dog.

Captain John W. Murphy stated during this investigation the detective was able to identify McGlone and get a copy of the video.

Captain Murphy said the detective is still currently working on trying to identify the dog and its whereabouts as McGlone is refusing to give any information on this dog.

Deputies say it appears that drugs could have been a factor in this crime.

McGlone is currently being held without bond in the Scioto County jail and will appear in Portsmouth Municipal Court on Tuesday, February 26th, 2019.

Captain Murphy stated that this office takes crimes against animals very seriously and that an investigation will continue in an attempt to identify this dog and assure that the dog is safe.

Anyone with information regarding this case should contact Detective Jodi Conkel at 740-351-1091. 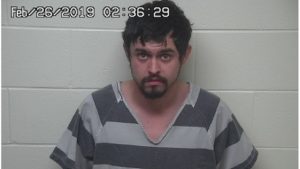