Scioto County Sheriff Marty V. Donini and Portsmouth Police Chief Robert Ware announce that a Columbus, Ohio man has been arrested in connection with a
narcotics – related search warrant executed on Chillicothe Street in Portsmouth, Ohio.
On Thursday, February 21, 2019 at 5:40p.m., the Southern Ohio Drug Task Force, assisted by officers with the Portsmouth Police Department, executed a search warrant at apartment “C” located inside a building located at 715 Chillicothe Street. The lone occupant of the apartment, 34 year old Gary Lamont Freeman II of Aster Avenue Columbus, Ohio was found in possession of approximately 143 grams of suspected crystal methamphetamine and 97 grams of suspected heroin and / or fentanyl having an estimated street value of $20,000. Officers also seized a .22 caliber semi automatic handgun with ammunition from the apartment and approximately $1200 cash on the person of Freeman II.
Freeman II was arrested and charged with Possession of Drugs, a felony of the 2nd degree, and placed in the Scioto County Jail.
Freeman II was to be arraigned in Portsmouth Municipal Court on
Friday, February 22, 2019 at 9a.m.
The case against Freeman II will eventually be forwarded to the Scioto County Prosecutor’s Office to be presented to a Scioto County Grand Jury for the consideration of additional felony drug charges.

Sheriff Donini and Chief Ware thank the public for their assistance in the investigation and request anyone wishing to leave drug information for the Southern Ohio Drug Task Force, should phone the Task Force tip line at
(740) 354-5656 or email drugs@sciotocountysheriff.com. All information will be kept confidential and anonymous. 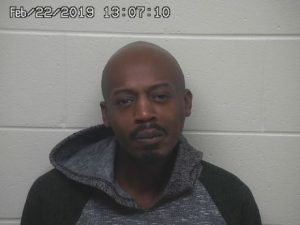