A Lucasville man, 18, was arrested Tuesday in connection with the alleged rape of a 15-year-old female victim in May.

Scioto County Sheriff Marty V. Donini said his office received a report Monday from another police agency stating a juvenile female had been sexually assaulted in May and they had just recently learned the assault occurred in Scioto County.

The location of the alleged incident was not made public. The victim’s name also was not released, presumably because she is a juvenile.

Capt. John W. Murphy stated officials quickly assigned a detective to investigate the reported incident. During this investigation, a Sheriff’s detective was able to gather information from the Ross County Child Protection Center including medical records.

On Tuesday, detectives responded to a Piketon Road address looking for the suspect who was not home at the time. Donini stated the suspect came to the office later that day as requested by detectives and officers arrested him without incident.

Diaz was being held in the Scioto County Jail on a $105,000.00 bond but also was slated to appear in Portsmouth Municipal Court on Wednesday. No details of that appearance were available as of press time.

Murphy stated these types of cases are considered high priority and the quick arrest was the direct result of the joint effort of the Scioto County detective assigned to the case and the Ross County Child Protection Center. Murphy described the center as a tremendous asset, providing medical exams and juvenile forensic interviews.

The Sheriff’s office requests anyone with information regarding this case contact Det. Jodi Conkel, 351-1091. Officials said they will keep all calls confidential. 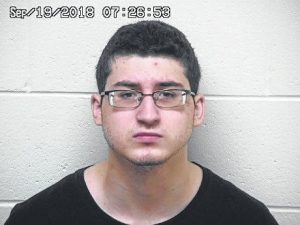