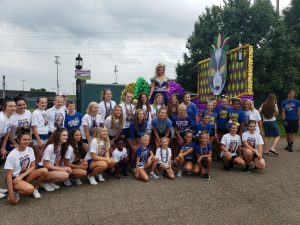 Learning qualities about yourself and others, while participating in a platform of your own, is always going to be a special quality that endears people to the said person who does such a thing.
On Saturday evening, one could argue that it was Ally Smith’s presentation, as much as her style, that helped the Miss Clay representative take home the coveted title of 2018 Miss River Days Queen, which was awarded to Smith over the likes of fellow standout competitors Baylee Martin (South Webster) and Kylan Canary, who were named as the first and second runner-ups in the competition.
For Smith, the dream of winning the crown of 2018 Miss River Days — a dream that she once thought as a near impossibility — is now reality for the young lady who arguably learned as much about herself as those she helped guide along the way through her platforms.
“Everything leading up to this big moment has been so thrilling,” Smith said. “It is such a huge honor to be crowned as the 2018 River Days Queen. I couldn’t be more excited to be able to represent this area this upcoming year with my sister queens (Baylee Martin and Kylan Canary).”
Smith, who initially raised $650 for her platform “Dancers Against Cancer” in an effort to help those stricken with all different types of cancer to receive financial aid.
But as she began serving her title of Miss Clay in a successful manner, the unfortunate affects of bullying reared their ugly head.