Along with his parents he was preceded in death by the love of his life, and wife of 65 years, Lucille (Vinson)Windle, a daughter Paula Jean Butler, 2 sisters: Flora Ellen Windle and Irene Benson, and 2 brothers: Ernest (June) Windle Jr. and James (Snook) Windle.

Bill was a WWII Navy veteran having survived his ship being sunk in the Battle of Layte Gulf and spent 3 days in shark infested waters before being rescued. He was a member of Ohio Valley United Baptist Church for 69 years, having served as a Deacon and a clerk. He worked as a mechanic for Borden Milk Company for over 33 years until his retirement. He loved gardening, his family and his church family. He spent the last 3 years of his life at the VA Facility in Chillicothe where he touched everyone he met, with his singing gospel songs, His goal was to live to be 120 years old, and although he didn’t meet that goal, he gave it his all to try.

Funeral services will be 11:00 AM Friday December 16, 2022 at the Roger W. Davis Funeral Home in West Portsmouth with Pastors: Joe Salyers, Clayton Oliver and Marshall Oliver. Interment will be in Scioto Burial Park with military graveside rites by the James Dickey Post 23 American Legion. Friends may call at the funeral home from 6 to 8:00 PM on Thursday and one hour prior to the service on Friday. Condolences may be sent to www.rogerwdavisfuneralhome.com. 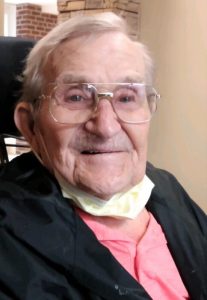