James Thomas Russell, 84, of Portsmouth, passed away surrounded by his family on Monday, November 28, 2022.  Tom was born July 15, 1938, in Portsmouth, a son of the late Robert Edward and Ruth Elizabeth Reynolds Russell Sr.

Tom was proprietor of the former Tom Russell Glass & Mirror Co. in Portsmouth, a business he and his family operated from 1985-2017. He had formerly worked for 30 years at E.H. Russell Glass Co., which was founded by his grandfather and father. A member of Holy Redeemer Catholic Church and its Men’s Choir for many years, Tom was a 1956 Notre Dame High School graduate. He was also a former member of the Knights of Columbus, the Portsmouth Jaycees and the Boneyfiddle Festival Committee. A master craftsman of many trades, Tom saved and restored the historic Julia Marlowe Building on Front Street in Portsmouth.

In addition to his parents, Tom was preceded in death by two grandchildren, Emily Russell and Storm Nathaniel Bratchett.

Private services were held under the direction of the Ralph F. Scott Funeral Home in Portsmouth with Deacon Jim Sturgeon officiating and interment in Greenlawn Cemetery. 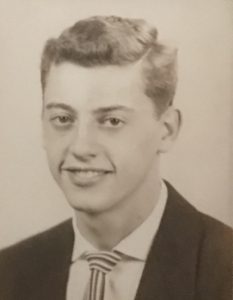