She was born November 20, 1919 to the Eugene and Edith (Spohn) Carson. Along with her parents, she was also preceded in death by her husband Arthur Hossman, and three brothers, Harold Carson, Lou Carson, and Raymond Carson.

She is survived by her son Arthur (Phyllis) Hossman of Grand Rapids, Michigan, and granddaughter Lynsey Hossman of New York, New York.

During WWII she was a “Rosie the Riveter,” building “Hell Divers” at Curtiss Wright in Columbus, Ohio.

After Anne’s retirement she served as an active volunteer for Hospice for over 20 years.

In 2004, she established the Arthur W. and Anne Carson Hossman Fund at the Scioto Foundation to benefit the Southern Ohio Performing Arts Association. Anne was a member of Cornerstone United Methodist Church.

The family would like to thank the staff of Hillview Retirement Center and SOMC Hospice for their kind and compassionate care. 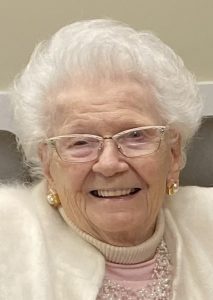