Sandra Ann Douthat, 79, of Portsmouth, passed away Saturday, November 26, 2022, in Portsmouth surrounded by her loving family. She was born May 31, 1943, in Portsmouth, VA, a daughter of the late Gladstone Warren and Ruby Jewell Palmer Hammond.

On August 1, 1964, Sandy married her high school sweetheart Jerry Leroy Douthat in Portsmouth, OH. The couple had been happily married for 46 years at the time of his death on February 26, 2007.

Sandy was a life-long member of Central Church of Christ. She retired from Rehab Care at SOMC and she had worked as secretary and office manager for SOMC Speech & Hearing. She also served as a volunteer in Same Day Surgery. Prior to her move to SOMC, Sandy had worked as a dental assistant and then as an administrative assistant in the dental practices of Dr. Richard Brunner and Dr. Martin Pierron. Following retirement, she became a vendor at Ghosts in the Attic. A graduate of the former Portsmouth Interstate Business College, Sandy was a proud 1961 Portsmouth High School graduate and she served on the class reunion committee. She absolutely loved nothing more than time spent shopping and traveling with her many friends.

Funeral services will be held at noon Saturday at the Ralph F. Scott Funeral Home in Portsmouth with ministers Dennis Dawes and Thayer Wallace officiating. Interment will follow in Greenlawn Cemetery.

The family will receive friends one hour prior to services at the funeral home.

Sandy had a kind and generous heart and was eager to help people in need. She donated her late mother’s property to the Southern Ohio Domestic Violence Shelter and the family requests that contributions be made in Sandy’s memory to the shelter at 2315 Grant St., Portsmouth, OH 45662. 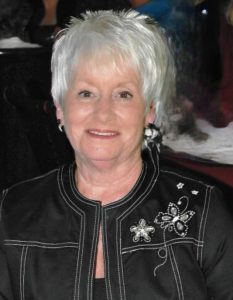