Jack was a 1969 graduate of Northwest High School and he attended sight-saving classes at the former Scudder School. He received a degree in Business Enterprise from Columbus State Community College, a program only available for the legally blind.

Many will remember Jack as the man with the beautiful voice who operated DMK Vending in the Scioto County Courthouse for several years. He operated a similar kiosk in the Richland County Municipal Building. Jack had also worked as an auctioneer, at Goodwill Industries, Sunset Lanes, Carpenter Heating & Cooling, and he worked the platform at the former Stockham’s Ice Plant. Along with his wife, he owned & operated The Robin’s Nest, a bait & tackle shop located at Clearfork Marina in Lexington, OH.

Jack married the love of his life, Earleen Robin Brewer Davis, on December 18, 1976, at Duck Run Church in McDermott and she preceded him in death June 22, 2017. They renewed their wedding vows on their 40th Anniversary at the Morgan Township Senior Center on Big Bear Creek Road in Lucasville. 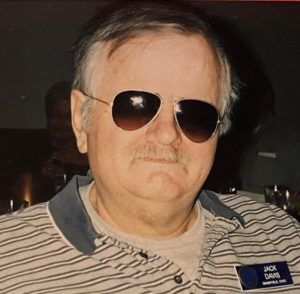