Shirley Sue (Smith) Syroney, 79, of New Boston, went to her Heavenly Home on November 1, 2022. She was born to the late Jesse Smith and Rosella Jenkins. She was united in marriage to the late George Beatty Syroney I, on February 24th, 1967.  She is survived by two sons; George (Lori) Syroney II, and Gregory (William Scott) Syroney, one daughter; Sharon Syroney, grandchildren; George III, Caitlin, Adam, Stephanie, Kyle, Keri, and Jordan, several great-grandchildren, brothers; Harry, Gary, and Dwayne, and several nieces and nephews.  Also preceding her death besides her parents and husband are one grand-daughter Sarah, sisters; Jessie, Joann, and Joyce, brothers; Charles, and Paul, and half-brothers & half-sisters; Robie, Roma, Lula, Notley, Sharma, Velma, Jessie, and Geraldine.

She took great pride in serving her family and her hometown.  She was a former member of the Rarden United Methodist Church, United Methodist Women, Rarden Volunteer Ladies Auxiliary, and Rarden Volunteer Fire Department as a driver for Rarden Squad 4, Northwest C.B. Radio Club, and Peebles Lions Club, former council member of the Rarden Village, and former Board of Election Worker during Election days for the Village of Rarden.

Graveside services will be on November 10, 2022, at 1:00 pm, at Mustard Cemetery in Rarden, Ohio, with Rev. Larry Moore. In lieu of flowers, donations can be made to Botkin Hornback Funeral Home in Waverly, Ohio by calling (740) 947-2313.  The family would like to give thanks to all the staff members at Blessed at Home, Portsmouth Health and Rehab, and Southern Ohio Medical Center. 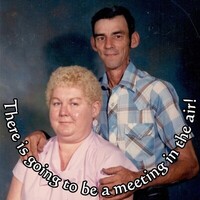