Luther Leslie Mustard, 84, of Piketon, Ohio passed away Monday, October 31, 2022 at SOMC Hospice Center in Portsmouth.  He was born January 23, 1938 in Pike County, Ohio to the late James Roy Mustard and Lenora Alice Williams Mustard.  In 1973 he was united in marriage to Linda Sue Mustard who preceded him in death on November 16, 2020.  Surviving are a daughter, Angie (Paul) Bushatz of Waverly; Scott “Jessie” (Erica) Burton, who he raised as his own son; 5 grandchildren, 5 great-grandchildren; and a special brother-in-law who checked on him every day, Claude Martin.  In addition to his parents and wife he was preceded in death by 3 grandchildren; brothers, Ottie, Otis, Richard, Leon, Ernest, Glendale and Golden; and sisters, Cordy, Irene, Dottie and Goldie.

Graveside services will be held at 1:00 pm Friday, November 4, 2022 at Gardner Cemetery with Dan Ramey officiating. Military honors will be conducted by American Legion Merritt Post #142 of Waverly. 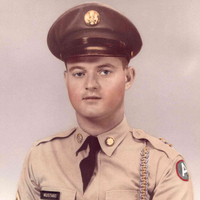