Curtis William Gentry, 85, of Durham, NC, a former Portsmouth resident, passed away Saturday, October 29, 2022, in Durham. He was born August 8, 1937 in Waco, KY, a son of the late Mary Frances Hisle Gentry Cavanaugh and Leon Gentry.

Curt was a 1955 graduate of Portsmouth High School where he is a member of the Trojan Hall of Fame. An outstanding athlete, he was a defensive back in the NFL from 1966-1968, playing for the Chicago Bears and wearing #46. Curt was also a former member of the Harlem Globetrotters and played AAA baseball for the Detroit Tigers. While serving in the US Army, he played with his post basketball and baseball teams.

The City of Portsmouth, Ohio honored Mr. Gentry with a star on the floodwall murals as well as with his likeness on the mural honoring local sports figures.

In addition to his parents, Curt was also preceded in death by two siblings, Thomas Leon Gentry and Betty Kathleen Gentry.

Funeral services with Live Stream will be held at noon on Saturday at Beulah Baptist Church with Rev. Richard Jordan officiating and interment in Greenlawn Cemetery. The family will receive friends at the church from 11 A.M. until the funeral hour.

Arrangements are under the direction of the Ralph F. Scott Funeral Home..

The flag of the US Army will fly at the funeral home in honor of Mr. Gentry’s service to our country. 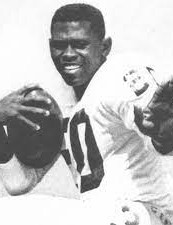