Dorsey Lee Rinehart, 90, died Saturday, October 29, 2022, at Hill View Retirement Center.  Born on March 25, 1932 in Scarbro, WV, he was a son of the late Hallard and Ruby Stover Rinehart and a proud member of Berean Baptist Church.

Dorsey was a graduate of Kinston High School in West Virginia, retired insurance adjuster, and enjoyed watching kinds play sports, and was a West Virginia and Cincinnati Reds fan.

A proud Army veteran, Dorsey served his nation during the Korean War.

Also preceding him in death were his wife Barbara Rinehart, who died December 2, 2016 and a son, James Beverly Rinehart.

A service will be held at 11:00 a.m. on Wednesday, November 2nd, at the BRANT FUNERAL HOME IN SCIOTOVILLE with Pastor Steve Mann officiating.  Interment will be in Memorial Burial Park.

Memorial gifts may be made to Berean Baptist Church.

The American Flags on the Avenue, along with the U.S. Army flag, will fly in honor of proud veteran, Dorsey Rinehart. 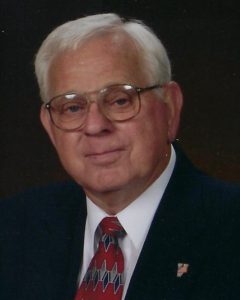