(Norma) JEAN EMSHWILLER, New Boston, OH – After a lifetime of caring for others, (Norma) Jean Bowling Emshwiller, 95 of New Boston, OH, passed into the arms of her Heavenly Father late afternoon on September 10th, surrounded by her loved ones. Jean was born on September 13, 1926 in New Boston, OH to Douglas H. Bowling and Gladys Flaugher Bowling, both of whom preceded her in death. She was married to the love of her life, (Ralph) “Shag” L. Emshwiller for over fifty years until his passing in 1999. They were the parents of (Ralph) Michael (Kim) Emshwiller, Portsmouth; Brenda (Ed) Thompson, Portsmouth; and Tim (Renie) Emshwiller of New Boston. Being a mother was Jean’s life’s calling. The love she showed for her children was unmeasured and only rivaled by the love she had for her grandchildren. Kirk (Erica) Thompson, Derek Thompson & Ashley (Eric) Layne will miss her dearly. As will her great grandchildren: Boston Thompson, Ella Thompson, Coco Thompson, Kru Thompson, Kyndal Thompson, Kyleigh Thompson, Harper Layne and Ivy Layne.

In addition to the tremendous amount of love she gave throughout her life, Jean also found great joy in cooking for her family and friends. Whether it was a skillet of cornbread, chicken and dumplings, or a slice of apple pie, you knew you were in for a treat when you sat down at Jean’s table. EVERYONE loved visiting JEANIE’S house on Glenwood Ave. in New Boston, a place that has been in the family for 76 years!

Services will be held at the First Church of God, 3920 Gallia St., New Boston on Thursday, September 15, at 1:00 p.m.  Visitation will be at the church on Wednesday, September 14 from 5:30 to 7:30 p.m. and one hour prior to the funeral.  Burial will follow at Memorial Burial Park, Wheelersburg, OH. Funeral arrangements are under the direction of D. W. Swick Funeral Home, 1104 Harrisonville Ave, New Boston, OH 45662.

Before her passing, Jean had the distinction of being the oldest resident of New Boston. It could truly be said of Jean that TO KNOW HER WAS TO LOVE HER.  She was an inspiration to so many and will be greatly missed by everyone.  She was OUR SUNSHINE! 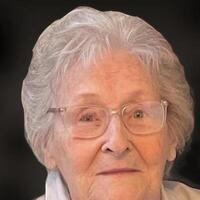