Evelyn Louise Bloomfield, longtime West Portsmouth resident, went to be with her Lord and Savior on September 5, 2022.

She was preceded in death by her father, Homer Bloomfield and her mother Hazel
(Nee Holley) Bloomfield.

She is survived by her son Chris Bloomfield of West Portsmouth, sister Linda (Jerry) Huffman of Franklin Furnace, a nephew Jeff (Missy) Huffman of Franklin Furnace, a niece Amy (Ray) Kuhn of Lucasville, and four great niece and nephews that she was extremely proud of, Madison (Clay), Andy, Zach, and Ethan. She also leaves behind so many wonderful friends and her pride and joy, a miniature schnauzer named Brutus.

Evelyn was a 1966 Portsmouth West graduate. She was a former EMT for Washington Township Squad #9. Evelyn was retired from General Telephone Electric (GTE), where she started out as a telephone operator. She later became one of the first female line workers in the state, and was the first woman switch worker. She maintained the phone systems for all of Scioto county. She was active in the Democratic Party and the union Communications Workers of America (CWA). She was the Ohio Delegate for CWA to the 1984 Democratic National Convention, and traveled to Washington DC to lobby for the CWA. Evelyn was one of the founding members of the Widow/Widowers Club at F.C. Daehler Mortuary.

Evelyn loved to travel and read when she wasn’t working on quilts. She single handedly kept Longaberger baskets in business. Christmas was her favorite time of year. She would decorate anything and everything in sight. She even had a Christmas tree decorated in her favorite color purple, in her bedroom. She was truly blessed to find the Lord and the comfort from her, church family at Bethel United Methodist.
She will greatly miss all of her friends, but none more than Della, Susie, Sandy, and Hila.

Graveside services will be held at 11AM, Friday September 9, 2022, at Buckeye cemetery in Haverhill Ohio. Pastor Rick Phillips will be officiating.

Please visit www.fcdaehlermortuary.com to leave a special memory of Evelyn and condolences for her family. 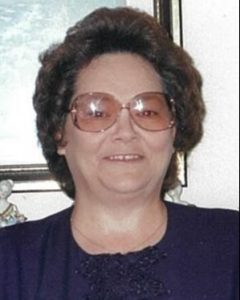