Daisy Aliene Williams, 86, of Portsmouth, went home to be with her Lord and Savior on Thursday, August 25, 2022, at Adena Regional Medical Center in Chillicothe. She was born April 23, 1936, in Flatwoods, KY, a daughter of the late Harrison and Alberta Burgess Callihan. At the age of 3 ½ years, her parents passed away and Daisy and her brother, James, were adopted by Clarence and Vada Smith.

She graduated from Portsmouth East High School in 1954 and married Jack Gerald Williams in Portsmouth on August 14, 1954. Jack served 60 years in the ministry and Daisy was an integral part of that ministry. They served seven churches over the years, including many years as the beloved pastor and wife at Mabert Road Baptist Church. Daisy was gifted with a lovely voice and she sang with the Gospelettes for 12 years and the Good Shepherd Trio for 30 years. She and Jack served with Evangelistic Outreach Ministries and following his retirement, the couple attended Rubyville Community Church.

While she was primarily a homemaker, she worked for more than 11 years at the former Ella Williams Disabled Veterans Home in Portsmouth. She loved flowers and she also earned a Floral Design degree from the former SCJVS (VoTec) and then worked at CJ Floral in Franklin Furnace. She was a former member of both the PHS Football Mother’s Club and the Ladies Auxiliary of the Portsmouth Receiving Hospital.

In addition to her birth parents and adoptive parents, Daisy was preceded in death by five siblings, Carl, Eugene and Robert Callihan, James Earl Smith and Lealy Hoover.

Funeral services will be held Wednesday at 2 P.M. at Rubyville Community Church with Rev. Calvin Ray Evans officiating. Interment will be in Sunset Memorial Gardens. The family will receive friends at the church from 11 A.M. until the service hour Wednesday. Arrangements are under the direction of the Ralph F. Scott Funeral Home in Portsmouth.

Contributions may be made in Daisy’s memory to the Evangelistic Outreach Ministries, 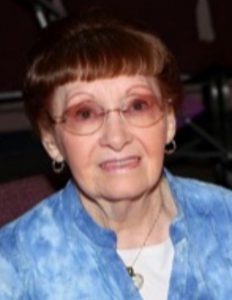