David Carl Penn, 75, of McDermott, passed away on Thursday, August 11, 2022 at SOMC Hospice.  He was born on December 2, 1946 in Rarden to the late Ralph Penn and Ruth Kremin Penn.  On February 22, 1969, he was united in marriage to his loving wife of 53 years, Sheryl Lee Powell Penn who survives.  Also surviving are his son; Donovan and wife Cara Jo Penn of Lombardsville; grandchildren, Adalyn Codi Penn of Lombardsville and MacKenzie Penn of Rosemount; his beloved pug, Napper; brother, Bill and wife Janie Penn of Lucasville and numerous nieces and nephews.  In addition to his parents, David was preceded in death by his son, David Corey Penn and siblings Lowell Penn and Kay Teeters.

David was a 1964 graduate of Northwest High School where he was a Prep-All American basketball player.  He continued his basketball career at Cambellsville University in Cambellsville, Kentucky where he graduated with a degree in education and business.  David was a schoolteacher from 1968 until 1977 when he started working construction.  In 1991 he and his wife founded Pool World and operated it for 30 years in the community.  During the 1980’s, David gave back to his community by serving as an EMT and Fire Chief for Union Township.  He was also a member of the Freemasons.  David enjoyed hunting and spending time with his family.

Funeral services will be held on, Tuesday, August 16, 2022 at 1:00 p.m. at Botkin Hornback Funeral Home in Otway with Pastor Daron Lilly officiating.  Burial will follow in Garvin Cemetery.  The family will receive friends from 11:00 a.m. until the time of the service at the funeral home on Tuesday. 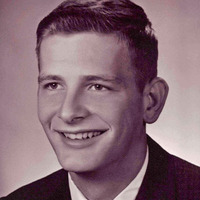