Jeremy Ethan “J.J.” Sheppard, 16, of South Webster, died Thursday, July 28, 2022 in Lucasville. He was born August 10, 2005 in Portsmouth to Jeremy Edward Sheppard and Chrissy Parsons.
J.J. loved everything about basketball, from playing for his South Webster High School Jeeps, where he was just weeks away from being a Sophomore in school, to having to get the newest Xbox basketball game. He also enjoyed the outdoors, going camping and fishing often, and loved being with his friends and family.
J.J. was preceded in death by his grandfather, Louis Parsons Sr., and his uncles, Charles Sheppard and James Sheppard, and his infant brother, Xavier Lee Parsons.
He is survived by his parents; Chrissy Parsons (Shea Black) of South Webster and Jeremy Sheppard (Brittine Price) of Blue Creek, his sister, Shyla Seirre Parsons Sheppard, his grandparents, Betty Canter of Wheelersburg, Charles and Karen Sheppard, his aunts and uncles,  Louis Parsons JR. (Teresa), Robert Sheppard (Kim), Kim Porter (Kevin Clark), Ada Sheppard, Daniel Sheppard, Matthew Sheppard (Cathryn), and George Sheppard (Dawn), and a niece, Lily Ann Grace Nelson, and several cousins and friends. He is also survived by several family in the Houston Texas area, cousins, Jessica Parsons and Staphanie Loop-Graham, and many other members of the Loop family.
Funeral services will be 2:00 PM Monday, August 8, 2022 at South Webster High School with Pastor John Black officiating. Burial will follow at Sunset Memorial Gardens in Franklin Furnace. A visitation for friends and family will be at the high school on Monday, from noon, until the time of service at 2:00 PM. Melcher Hammer Funeral Home is handling the arrangements. 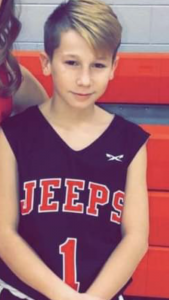