JOYCE CUMMINGS, 81, died Friday, July 29, 2022 at the SOMC Hospice Center, with her family by her bedside.  Born on July 19, 1941 in Scioto County, she was a daughter of the late Ezra and Elizabeth Trimble Holbrook.

She was preceded in death by her husband, Willard M. Cummings; five brothers, Bill, Don, Bob, Roger and Paul Holbrook; a sister, Connie Boggs and a son-in-law, Andy McClary.

A funeral service will be held at 11:00 a.m. on Wednesday, August 3rd, at the BRANT FUNERAL HOME IN SCIOTOVILLE.  Interment will be in Scioto Burial Park. 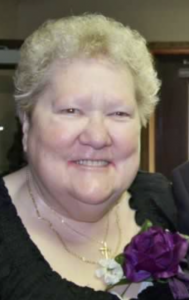