Andrew “Andy” Glenn Powell, 52, ran to Jesus on Monday, July 25th surrounded by his family. He was proceeded in death by his parents, Kenneth Powell and Alice Craycraft.

Andy, or Pookie as she likes to call him, is survived by his wife, Beverly Powell, whom he loved since day one. They shared a beautiful 23 years together and built a marriage that could easily rival even the mushiest Hallmark movie. Daisies were almost always on their dining room table as a sweet reminder of their love.

Andy served his country in the United States Navy and then served his community as a Firefighter/Medic at the Portsmouth Fire Department for 29 years. To know Andy was to love him. He had a gift of making anyone around him feel important. He was a follower of Christ, a listener, an encourager, and found joy in making other people laugh.

He could tell a joke like no one else! He was quick-witted and a man of many hobbies including fishing, reading, playing and listening to music, tinkering, thrifting, and antique cameras. He served as an elder at Life Point Church, played on the worship team, and led several small groups over the last few years.

There will be a celebration of Andy’s life and legacy at Life Point Church in Portsmouth on Friday, August 5th. A gathering of family and friends will begin at 4:30pm with the celebration immediately following at 5:30pm. Military Rites will be performed by JamesDickey Post 23, American Legion and a farewell by the Portsmouth Fire Department.

The family would like to thank Jenny Glockner, Dr. Inoshita and his staff, and SOMC Hospice for the excellent care they provided to Andy throughout his illness.
Arrangements and services have been entrusted to the D.W. SWICK FUNERAL HOME in New Boston. Online condolences may be sent to DWSwickFuneralHome.com. 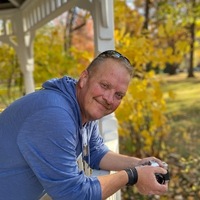