In 1952, Bill joined the US Air Force working in Global Communications all over the world. He was awarded the National Defense Service Medal and Good Conduct Medal and was honorably discharged on April 23, 1956. He later joined the American Legion James Dickey Post #23 in Portsmouth. Bill retired as a heavy construction salesman for John Deere Heavy Equipment and he had also worked for Rish Equipment.

An active member of Wheelersburg United Methodist Church, Bill was a 40-year choir member, a food pantry volunteer and former board member. He and his wife were also Meals on Wheels volunteers. He enjoyed working in his yard and growing vegetables which he shared with his friends and neighbors.

In addition to his parents, Bill was also preceded in death on June 15, 1989, by his first wife, Mildred “Millie” Alice Odenbach Trent. The couple was married in Cincinnati on October 24, 1959; two brothers, Frederick Trent and Harold Trent; and a sister, Gracie Marie Lanier.

The family will receive friends one hour prior to services at the funeral home.

The flag of the US Air Force will fly at the funeral home in honor of Mr. Trent’s service to our country.

In lieu of flowers, memorial contributions may be made to Wheelersburg United Methodist Church, P.O. Box 190. Wheelersburg, OH 45694. 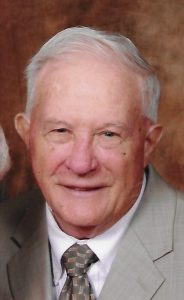