Skip to content
FacebookEmail
| logout
Fredrick (Fred) Lee Collins, 65, of New Boston gained his angel wings on July 19, 2022 at SOMC Hospice in Portsmouth.  Fred was born May 10,1957 to the late Norman and Evelyn Collins in Portsmouth, Ohio. He passed peacefully with his daughters holding his hands.
Fred had a heart of gold and would happily help anyone out anytime he could. He worked in construction and held various jobs but his job with the Village of New Boston was his best fit as it allowed him to always know where his girls were, who they were with, and what they were doing.  He took pride in keeping Millbrook Park looking it’s finest during his time working for the Village.  Fred enjoyed spending time with his grandchildren in the alley, where he often felt the need to remind people of the speed limit and that there were kids at play.
Fred was preceded in death by both of his parents and brothers, Norman Collins, Stan Collins, Dave Collins, and Donald Collins.
Surviving Fred are his two daughters, Chandra (Dustin) Holbrook of Brentwood TN, and Natosha (Shane) Collins of New Boston; Grandchildren Tanner, Noah, Eden, Aspen, Jase, Jagger, Breyton and Kiersten; Brothers Mike Collins, Bo (Denise) Collins, Elvin (Tina) Collins, and Terri Collins; Sisters Rosemary Gibson, Bertie, Rita (Jason) Burch and Sherri Collins as well as many nieces and nephews. Also surviving are two previous wives, Cheryl Blackburn and Elizabeth Huffman; one step-daughter, Kaitlyn Mingus; and one step-son, Wyatt Mingus. His dog, Tye, is also still among us, so if you happen to see him out around the park please give him a loving pat on the back and a kind word as he is probably just looking for Fred.
Fred requested that there be no official services.  He didn’t like attention or any kind of funeral service. The family would like to thank all of his medical providers, especially Dr. David Provaznik for always being the center stone for his care, and the staff at SOMC Hospice for ensuring his final moments were as peaceful as possible and allowing him to pass with dignity. D.W. SWICK FUNERAL HOME IN New Boston are handling the arrangements.  Online condolences may be left at DWSwickFuneralHome.com. 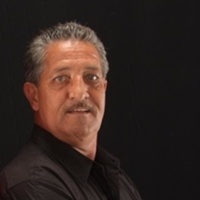