Tommy E. Stegall, 70, of Stoney Run was born on January 7, 1952 in West Portsmouth to the late Thomas and Myrtle Ratcliff Stegall.

Along with his parents, he was preceded in death by his wife of 40 years, Joyce Fox Stegall, a brother, Hershel Stegall, a sister, Raymol Jordan, and brother-in-law, Jack Jordan.

Tommy is survived by his children; a son, Jared (Michelle) Stegall of North Port, Florida; a daughter Angel (Shawn) McHugh of Columbus, Ohio; 3 step-sons, Terry Riddle, Todd Riddle, and Timmy Riddle; 10 grandchildren;  14 great grandchildren, and a sister-in-law, Joyce Stegall. He had a very large family which he loved.

Tommy was an amazing guitar player from the age 7 years old. He was scouted at a church at a young age to play at the Grand Ole Opry. He played and sang at many churches throughout his life. He loved his children with all his heart. He passed his guitars onto his son, Jared, and his grandson, Hunter, in hopes they will one day play them. His first song he could play was House of the Rising Sun.
He enjoyed being outdoors. He loved nature, fishing, and hunting for ginseng.

Per Tommy’s wishes, he was cremated. His family will hold a private gathering and celebrate his life in nature as he wanted. Arrangements are under the direction of the Roger W. Davis Funeral Home in West Portsmouth. Condolences may be sent to www.rogerwdavisfuneralhome.com. 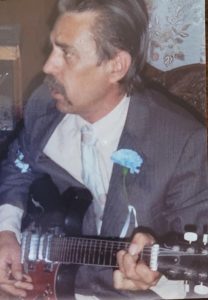