Ada E Eichenlaub, 97, of McDermott, passed away on Saturday, June 25, 2022 at Rest Haven Nursing Home.  She was born on September 23, 1924 in Pike County, Ohio to the late Albert Springer and Lora Ramsey Springer.  On June 1, 1946 she was united in marriage to Joseph “June” Eichenlaub, Jr who preceded her in death in 1978.  Surviving are her daughter; Peggy Sue (Phil) Pertuset of West Portsmouth and many nieces and nephews.  In addition to her parents and husband, Ada was preceded in death by her son, Dale R Eichenlaub and siblings, Lester Springer, Ruby Grooms, Beatrice Leonard and Virginia Ella Crabtree.

Ada was a homemaker who enjoyed spending time with others and sharing her love of baking.  She took pride in sharing her creations with all she knew especially during the holiday season.

Services are in the care of Botkin Hornback Funeral Home in Otway. 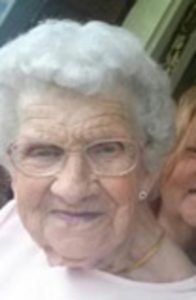