Along with her parents she was preceded in death by 2 brothers: Joseph Sowards Jr. and Rick Sowards and brother-in-law Gary Ridout.

Tina was a bus driver for Washington-Nile Local School district for over 30 years. She loved her grandchildren and loved to watch them play sports through her Game Changer App. She also loved to watch Calvin Ray Evans and Brian Baer on Sunday mornings.

Tina is survived by her husband Jeffery A. Smith, whom she married on July 21, 1979, a son Jeffery A. Smith Jr. , 2 daughters: Christie (Mac) Hurst and Jennifer (Mike) Chaney, a sister, Donna Ridout, sister-in-law Michelle Sowards, niece Laci (Josh) Simpson and the ones that called her “Grammy” the loves of her life, Connor and Corbin Chaney, along with several cousins, nieces and nephews.

Funeral services will be 11:00 AM Thursday June 30, 2022 at the Roger W. Davis Funeral Home in West Portsmouth with Reverend Calvin Ray Evans and Brian Baer officiating. Interment will be in Scioto Burial Park. Friends may call at the funeral home from 6 to 8:00 PM on Wednesday and one hour prior to the service on Thursday. Condolences may be sent to www.rogerwdavisfuneralhome.com. 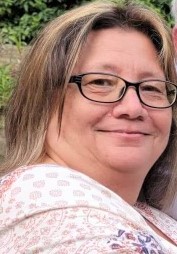