Ernie was a 1958 graduate of Clay High School in Portsmouth, Ohio and he attended Ohio University with a major in Special Education.  Ernie married Margaret “Peggy” Jo Cooper on March 13, 1965. With a growing family blossoming, Ernie opened Valley Wholesale Foods, Inc. a distributor of food and paper products. Since the company’s inception in 1974, it has grown into a regional presence, servicing schools, restaurants, bakeries, hospitals, among other businesses. One of Ernie’s greatest passions was his business. He took great pride in his company.  He loved and valued his employees, who over the years have become like family to him and helped make his business into a huge success. He loved helping the community and often donated products or money to various nonprofit organizations.  At one time or another all six of his children and many of his grandchildren have assisted at the family business.

His other great passion was his family.  Ernie always made time to attend ballgames of his children and grandchildren.  He was always active and all the kids from the neighborhood could be found playing games in the side yard or the pool at the Vastine house.  He taught so many how to ride a bike, how to catch a fly ball, how to hit a ball.  He always took the family to the beach for a week in the summer and celebrated holidays with cookouts with the family.  He also loved to go fishing at the lake, take a relaxing boat ride, and he enjoyed his garden and watching his bird feeders.

Ernie has been a long-standing member of the community, and also served on many boards and organizations.  He was a member of the Aurora Masonic Lodge #48 and proudly wore his Masonic ring. He was a member of The Rock Church and a Little League baseball coach for many years and sponsored the baseball and softball teams each year for many of the local schools.  He, like his father, served on the Clay Local School Board of Education.  He was so proud to be able to give back to the community that he so loved.  He received many awards, including ones from the Portsmouth Area Chamber of Commerce, Boy Scouts of America, Clay High School, Rotary, and more.

Ernie was preceded in death by his parents, Ernest Zatto & Mildred Vastine; and a sister, Patricia Vastine Zeller.

Ernie will be remembered for his quick wit, his infectious smile, the twinkle in his eyes, and his kind and compassionate spirit.

Funeral services will be held at 11 A.M. Saturday at Cornerstone Nazarene Church in Wheelersburg with Rick Clark, minister, officiating. The family will receive friends at the church one hour prior to services.

In lieu of flowers, the family requests that memorial contributions be made to the Ernie Vastine Memorial Scholarship, c/o The Scioto Foundation, P.O. Box 911, Portsmouth, OH 45662. 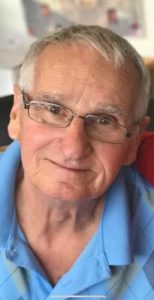