Raymond Lee Walker, Jr., 71 of Wheelersburg passed away Thursday, May 26, 2022 at Southern Ohio Medical Center. He was born July 8, 1950 in Portsmouth, a son of the late Raymond Lee Walker, Sr. and Carolyn Faye Fraley Martin. Ray was a pipefitter and a member of Local 577.

He is survived by his wife, Phyllis Dummitt Walker who he married July 7th, 1972; two sons, Tommy (April) Walker, Jerod (Stacey) Walker; three grandchildren, Kylee, Tate, Rhett; two great grandchildren, Hudson and Zane; one brother, Greg (Connie) Downing, and one sister, Missy (Phil) Coleman. In addition to his parents, he was preceded in death by one granddaughter, Kendra and step-mother Julia (Pat) Walker

Ray or “Groovy” as most people knew him grew up on Rosemount Hill and was a graduate of Clay High School. Ray was a graduate of ITT Technical Institute of Indiana, and later joined the plumbers and pipe fitters apprenticeship where he worked until his retirement. He loved his job and the hall, and continued to be involved with Local 577, volunteering most years to work their elections. He was an avid supporter of trade schools, having his son and grandson go into welding trades.

Retirement has been good to Ray. As a jack of all trades, he loved perfecting his campground retreat and building cabins on their riverfront property. His natural habitat was working on his pontoon boats and operating his Terramite backhoe. He loved fishing on the Ohio River with his best friends Mike and Jeff. He also looked forward to spending time with his grandkids and especially his great grand kids, who he gave golf cart rides to and watched them on their tractors.

Holidays were some of his favorite times, from hiding the eggs on Easter to hosting his annual 4th of July camp out for his family and friends. The first weekend of July was filled with cookouts and boat rides for the whole family, it was always a weekend to look forward to. He recorded it all with his silver pocket camera, and most recently his iPhone. He leaves a legacy of memory cards with enough photos to last a lifetime.

You do not know how perfect your life is until your foundation is taken away. Groovy was our foundation, and he will be missed forever.

In keeping with Ray’s wishes, a memorial service will be scheduled at the convenience of the family and at a later date. Arrangements are under the direction of Erwin-Dodson-Allen Funeral Home in Minford. Online condolences may be sent to www.edafh.com. 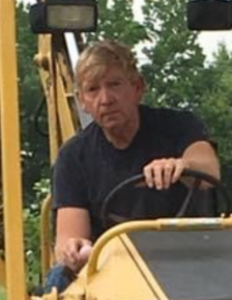