John was a graduate of Portsmouth West. After high school he immediately joined the work force where he worked at Detroit Steel Mill until he and his wife went on to build the locally known business of Weaver’s Gas & Oil, where he retired. Sports has always been an intricate part of his life where he officiated football, coached several teams, starting with the Dry Run Spartans basketball team, continuing with years of service to the West Portsmouth Little League Association, Portsmouth West Baseball and Softball teams, Del Rice League and ending with assisting the Shawnee State Ladies Softball team. John enjoyed fishing with his buddies, golfing where he always bragged about his “Hole in One,” and many Saturday nights spent at Portsmouth Raceway Park. Of course, he loved his garden where he spent many hours with friends to see who could tell the biggest story. John was awarded “Man of the Year” by the Nauvoo Masonic Lodge #769 in 2016.

Along with his parents, John was preceded in death by his daughter, Beth Ann Weaver, and a sister, Dorothy “Dene” Compton.

John is survived by his wife, Patty, whom he married on August 26, 1961; a daughter, Dee Weaver Cox (Bryan) and a son, Darrell Weaver (Jenny). Along with his wife and children, John is survived by his grandchildren, whom he loved more than life itself, Brittany Cox Chandler (Matt), Courtney Cox, Blaine Weaver, Brandon Weaver, and two sisters, Mildred Dean and Alice (Bob) Morgan. John is also survived by many, many friends, his Sunday morning “coffee club,” his sister-in-laws and brother-in-laws.

Funeral services will be 1:00 PM Sunday May 15, 2022 at the Roger W. Davis Funeral Home in West Portsmouth with Rick Ratliff officiating and interment in Scioto Burial Park. Friends may call at the funeral home from 4 to 7:00 PM on Saturday and one hour prior to the funeral on Sunday. The family requests donations can be sent to SOMC HOSPICE, 2201 25th St, Portsmouth, OH, 45662. Condolences may be sent to the family at www.rogerwdavisfuneralhome.com. 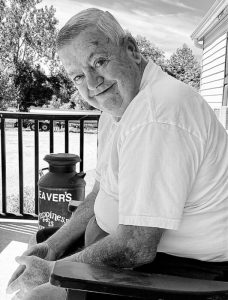