He is preceded in death, July 28, 2017, by his beloved wife Carol Burgess-Vice whom he married on August 19, 1955, along with a grandson, Kyle Blevins of Rubyville.

He was a retiree from the Ohio Operating Engineers Union Local #18 out of Columbus and was known in the industry as “Sonny”.  He specialized in the operation of large cranes working on many construction projects throughout the state of Ohio during his life. Clay was a standout athlete in both baseball, and basketball at Clay High School, where he graduated in the class of 1953, and later served on the Clay Local School Board.

Clay coached his son in Little League and was instrumental in establishing the girls Little League program in the Rosemount area.  His knowledge of the game lead him to assist his wife Carol in coaching the Clay High School women’s softball program starting in 1978. Over their 11 year span, the coaching team accumulated a 93.7% winning record leading the girls to 3 State Championships, 3 State Semi-finals, 2 State Runners-up, along with 8 Regional Championships The pair were honored locally by signing their names to the Portsmouth Stars on the flood wall.

Clay was a devoted husband, father, and grandfather who enjoyed spending time with his family, and watching his grandchildren, and great grandchildren as they excelled in all sports. Hunting on his farm became a yearly highlight as he looked forward to this with his family. He is an avid fan of, and closely followed The Ohio State Buckeyes.

Funeral services will be conducted Noon, Wednesday, May 4, 2022, at the McKinley Funeral Home in Lucasville with Brent Barrett officiating. Burial will follow in Rosemount’s Orm Cemetery. Friends may call 5 to 8 p.m. Tuesday and an hour prior to the service Wednesday at the funeral home.

In lieu of flowers, memorial contributions may be made to the Clay High School Athletic Department, 44 Clay High Street, Portsmouth, OH 45662. 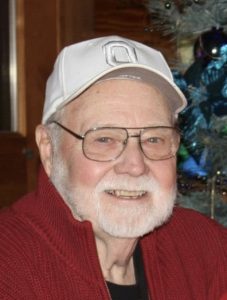