Jerry was a Class of 1968 graduate of Glenwood High School. He was an Air Force veteran, and afterwards, an outdoor painter, having painted water towers and bridges.

Jerry graduated from Shawnee State University in 2000 with a degree in biology, specializing in botany. He enjoyed reading science fiction and discussing politics.

He was predeceased by his parents; sister, Pamela Joyce Williams and brother, David G. Williams and special niece, Anita Chaney.

He is survived by four sisters: Diane Nolan, Brenda Estes, and Jayne Stone of New Boston and Kristie Mullins of Portsmouth; three brothers: Steve Williams of Sciotoville, John Williams of Wheelersburg and Andy Williams of Canton, OH, and his best friend of thirty years, Dwayne “Wood” Taylor and his family, and numerous nieces and nephews.

A graveside service is planned for a later date.

Please visit www.fcdaehlermortuary.com to leave a special memory of Jerry or condolences for his family.

Memorial donations may be made to SOMC Hospice, 2201 Twenty-fifth St. Portsmouth, OH 45662 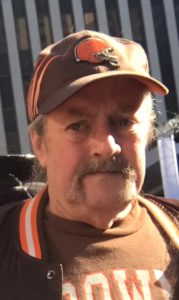