Duane Lee Rigsby, 52, of Portsmouth, passed away on April 27, 2022, at Hospice of Central Ohio at Ohio State University Medical Center after a long battle with Non-Hodgkin’s Lymphoma.  was a member of St. Mary ‘s Catholic Church. Duane was born to LeRoy and Mary Jones Rigsby. He was a graduate of Eastern High School in the class of 1988. He graduated with his Associate Degree in Forestry Management from Hocking Technical College in 1990 along with his best friend since the 5 th grade, Dean Rapp. They started their careers with The Ohio State University South Centers in Piketon, Ohio after graduation. He worked in the agricultural field before rewriting his own job description after teaching himself to work on computers. He worked his way up at OSU South Centers to become their IT Support and later Systems Specialist. He taught formal classes, and many individuals, the basics of using computer technology. He was also instrumental in running the OSU South Center Studio with dear friends Patrick Dengel and Sarah Swanson. Duane was awarded the OSU Distinguished Staff award in 2010 and the OSU South Centers Outstanding Staff Award. He was a long-time member of the Lone Eagle Archery Club for many years with his good friends Darrell, and Dwayne and Wayne Risner, among many others.

He married the love of his life Linda L. Kielmar Gray on February 21, 1997. He was an amazing step-father to Rebecca Gray and later to his beloved daughter Katelyn Rigsby. Duane was preceded in death by his father, LeRoy Rigsby, his grandparents, Lundy & Mirta Rigsby and Cinnet & Maxine Jones, his father and mother-in-law, Richard & Saundra Kielmar, several aunts and uncles, as well as a very special uncle, Dave Jones, whom he loved and admired.

A Mass of Christin Burial will be 12:00 P.M. Wednesday. May 4, 2022 at St. Mary of the Annunciation Catholic Church, with burial following at Greenlawn Cemetery. The family has created an email for anyone to send pictures, videos, and to share stories and memories of Duane and his family. d.rigsby.memories@gmail.com 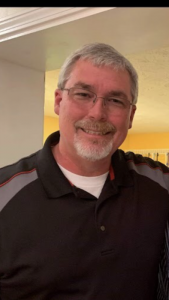