Maurice “Morrie” Walter Hammond, 90, of McDermott, reunited at sunrise on Resurrection Easter Sunday, April 17, 2022, with the love of his life, Alberta Jean Gibbs Hammond at his home. What a glorious celebration with Jesus, his Lord and Savior. We celebrate our Hero for the wonderful Dad, Grandpa and Great Grandpa that he was!

He was born December 2, 1931, in Portsmouth, a son of the late Dorothea Mae Elizabeth Ann Shope Hammond Sherrill and Hershel Walter Hammond. He attended Portsmouth City Schools. Maurice was married to Alberta in Portsmouth on January 22, 1953, and she preceded him in death on September 23, 2019. Morrie was a truck driver for McGovney Construction Co. for 20 years and was a mailman at USEC for 10 years. A proud Navy veteran of the Korean War, he served on the destroyer, USS Hollister DD-788 and was awarded the Good Conduct Medal, Korean Service Medal, United Nations Service Medal, National Defense Medal and the China Service Medal. He was a member of the American Legion James Dickey Post #23 and the Tin Can Sailors Vets DES and was a member of Cornerstone United Methodist Church. He was a proud and loving supporter of all aspects of life.

Maurice was also preceded in death by his daughter, Diana Jean Hammond; and his great-grandson, Bryson Seth Campbell.

Funeral services will be held at noon, Thursday at the Ralph F. Scott Funeral Home in Portsmouth with Rev. Perry Prosch officiating and interment in Scioto Burial Park. Military graveside rites will be provided by the James Dickey Post #23 Honor Detail.

The family will receive friends at the funeral home Wednesday from 5 to 8 P.M. and one hour prior to services on Thursday.

The family extends sincere thanks to the PCM nurses and SOMC Hospice staff for the excellent care Morrie received.

The flag of the U.S. Navy will fly at the funeral home in honor of Mr. Hammond’s service to our country. 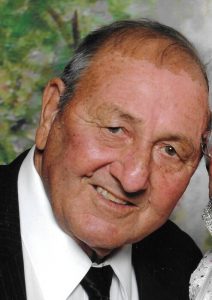