Betty Jean (Nance) Conkel, daughter of the late Howard D. and Mamie Rapp Nance, departed to be with her Lord on Wednesday, April 13, 2022.

Born December 19, 1933, in Portsmouth, Ohio, Betty moved to the Minford area at the age of 5. She attended Minford High School, Class of 1952. She married the love of her life, Curtis Edward Conkel, on August 2, 1950 in Vanceburg, Kentucky. She met Curt at the old Pflegers General Store in Minford, Ohio, where he worked. He passed away on November 2, 2005. She attended Rubyville Community Church in Rubyville, Ohio, until such time that her health would not permit her to do so.

Curt and Betty were married for 55 years, 3 months. Curt worked at Pflegers for 25 years and the Southern Ohio Correctional Facility (SOCF) for 24 years. He was also a member of the Board of Trustees of the Minford Telephone Company for 34 years and was Clerk of Madison Township for 12 years. Curt was an ordained Deacon of the Free Will Baptist Church.

They loved going to church together and until failing health kept them from going, they never missed church for anything. They bought their first home on Pfleger Road in Minford and lived there for 10 years until they built their new home also on Pfleger Road. They lived there for 43 years before moving to Curt’s family farm on Millers Run/Fallen Timber Road (where Curt was born and raised), and where Betty resided until her passing.

Betty worked at the Williams Shoe Factory in Portsmouth, Ohio for 3 years then began her career in nursing, which she dearly loved. She worked at the former Mercy Hospital for 7 years; for Dr. Melior (Lucasville, Ohio) for 16 years; and for Dr. Song (Portsmouth, Ohio) prior to retiring to be a full-time homemaker. She cared for her husband, cooked many meals for her family, friends, and neighbors. Her favorites were pies, chicken/beef with noodles, brownies and homemade ice cream. Betty loved playing the piano (self-taught) both at home for Curt as well as at area churches they attended. They also enjoyed visiting and worshiping with fellow Christians at other churches, watching their grandchildren and great grandchildren in sporting events, watching LeBron James and best of all her Cincinnati Reds.

Curt and Betty traveled all over the United States, through 49 states, with friends Harold and Helen Allen. She loved mowing her yard and working in the garden. They also loved attending the National Quartet Convention (for 31 years) and especially listening to the Gospel Harmony Boys (who would come to her parents home to freshen up and eat a good home-cooked meal before heading to their next booking). Through their travels, they met many new friends.

She loved her neighbors on Fallen Timber and they were so good to her (Canter, May, Colley, Mullins, Bragdon, Wells, and Witter families) and her “step-children” Russ and LouAnn Winn and Jeff and Cyndi Arnett. They were devoted to her, as well as to Curt prior to his passing, helping them to do anything that needed to be done around their home.

She was preceded in death by the love of her life, husband Curt; her parents, Howard and Mamie Nance; sister, Wilma Shonkwiler; brother, Howard Darryl Nance, (whom she helped care for near the end of his life); her grandchildren, Amanda Conkel and Jared Dever; brothers-in-law, Myron Givens, Everett Bennett and Eldon Conkel; sisters-in-law, Audrey Givens, Violet Bennett and Carol Conkel; nephews, Bobby Givens, Gerald Bennett and Dennis Shonkwiler, and two nieces, Candy Conkel and Pam Nance Higgins, who will all be awaiting her when she “steps off that ship”.

Funeral services will be conducted at 6:00 p.m. Saturday, April 16, 2022 at Rubyville Community Church with Pastors Calvin Ray Evans and Brian Baer officiating. Private burial will be conducted at the convenience of the family at Butler/Martin Cemetery in Minford. Friends may call at the church from 4:00 to 6:00 p.m. Saturday prior to the service. Arrangements are under the direction of Erwin-Dodson-Allen Funeral Home in Minford. Online condolences may be sent to www.edafh.com.

In lieu of flowers or other gifts, she asked that donations be made to the Jared “Hammer” Dever Memorial Scholarship Funds, Atomic Credit Union, Account Number 187885.

The family wishes to thank Best Care Nursing and Rehabilitation Center, Heartland Hospice, SOMC and SOMC Hospice House for their kind and compassionate care of their Mom at the end of her journey here on earth.

In her words, “I know Curt will be there waiting for me, but most of all, I want to see Jesus for he died for me.” 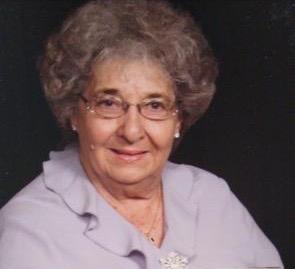